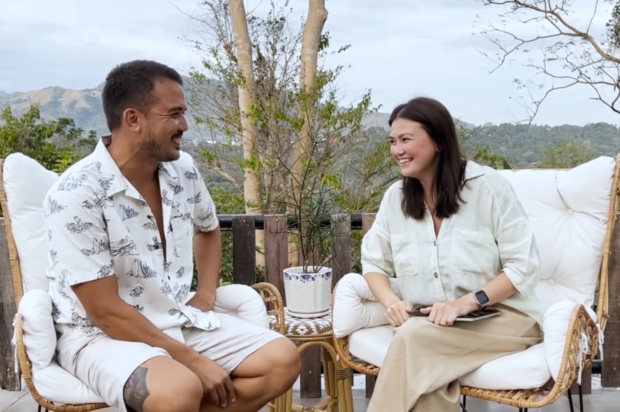 Angelica Panganiban and her non-showbiz boyfriend Gregg Homan looked back at how their love story started, and how they realized their relationship was “worth it.”

The couple recounted the beginning of their relationship while answering fan questions in their first YouTube vlog as a couple yesterday, May 23.

The actress, who is pregnant with her first child with Homan, stated that she and Homan were supposed to first meet in 2018 but that it did not push through. Years later, in 2020, they finally got a chance to see each other when the TV series “Walang Hanggang Paalam” had a taping in Subic, where Homan lives.

“Si Cherry Pie [Picache] ‘yung may kakilala sa kanya and may kakilala sa’kin na nangungulit na, ‘Sige na, sige na. Game na. Mag-meet na kayong dalawa,'” she said. (Cherry Pie Picache is the one who knows him and knows me, who kept on saying, “Come on, come on. Game. Meet each other.”)

(At first, I really did not want to. Because, not that I was jaded, but I felt tired of dating. I sort of felt like I was not interested, I was already happy being single.)

Panganiban eventually relented and went on a date with Homan. The pair then started communicating through texts and went on a boat ride together.

Panganiban also recalled that she often had an “entourage” of friends accompanying them in their early dates.

(My friends were there as backup… Like, “Stay here. Do not leave me with him.” As time went by, I noticed that I was enjoying with just the two of us talking.)

It was around this time that Panganiban extended her stay in Subic to be with Homan.

According to Homan, he and Panganiban started having conversations about building a family “early” into their relationship. It was around the Christmas holidays of 2020 when they had such discussions.

Panganiban also stated she wants to focus on her baby first before getting back to work, noting that she has been in show biz for 30 years.

(Maybe now that life is asking me to focus on my family because I am blessed to have something I can call a family right now… I should give my full attention to my baby.)

Panganiban revealed her relationship with Homan on New Year’s Day of 2021. The couple celebrated their first anniversary in July, also last year. The actress then announced last March that she is pregnant with her first baby.  /ra