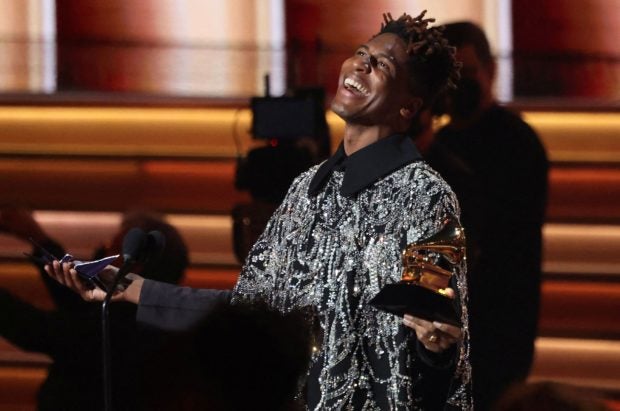 Jon Batiste accepts the Grammy award for Album of the Year for “We Are” during the 64th Annual Grammy Awards show in Las Vegas, Nevada, U.S., April 3, 2022. Image: Reuters/Mario Anzuoni

LAS VEGAS — The Grammy Awards, the highest honors in the music industry, were out at a live ceremony in Las Vegas on Sunday.

Multi-genre artist Jon Batiste won album of the year and R&B duo Silk Sonic took two of the top honors at the ceremony that featured a surprise appeal for support from wartime President Volodymyr Zelenskiy of Ukraine.

Batiste landed the night’s biggest prize for “We Are,” an album inspired by the Black Lives Matter movement.

“I believe this to my core – there is no best musician, best artist, best dancer, best actor,” Batiste said. “The creative arts are subjective… I just put my head down and I work on the craft every day.”

Silk Sonic, featuring Bruno Mars and Anderson.Paak, claimed the song and record of the year awards for their 1970s inspired hit “Leave the Door Open.”

“We are really trying our hardest to remain humble at this point,” joked Paak as the pair accepted the second honor.

Below is a list of winners in key categories.

ALBUM OF THE YEAR

RECORD OF THE YEAR

SONG OF THE YEAR