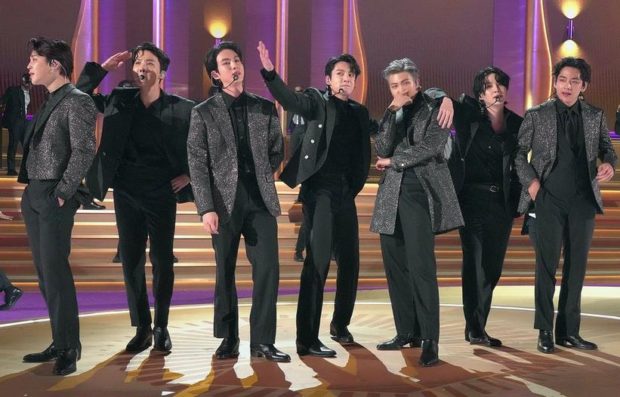 BTS at the 2022 Grammy Awards. Image: Kevin Mazur/Getty Images for the Recording Academy via Grammy.com

K-pop supergroup BTS has grabbed the attention of music fans around the world with a suspense-filled performance of its 2021 megahit single “Butter” on the stage of this year’s Grammy Awards ceremony.

The septet was fourth on the star-studded lineup of performers of the 64th edition of the show held at the MGM Grand Garden Arena in Las Vegas on Sunday (United States time).

Dressed in all black like spy agents, the group made a tense entry onto the stage to perform “Butter” with Jungkook descending on a wire from the top of the stage and V pulling a card from behind Olivia Rodrigo’s head.

The group then presented a spectacular show reminiscent of a scene from a spy thriller, jumping over lines made of laser light, throwing business cards or taking off their jackets, tying them together like a rope and pretending to play it like a guitar.

Jin sang the song sitting on a chair due to the injury he sustained last month.

As soon as the music ended, there was tremendous cheering from the crowd with some participants, like Olivia Rodrigo, giving a standing ovation.

It marked the third consecutive year that the group has performed in the awards ceremony. Last year, it presented a performance recorded from the rooftop of a high-rise building in Seoul due to the COVID-19 pandemic.

For the ongoing ceremony, BTS was nominated for best pop duo or group performance for the second consecutive year.

There are high expectations in the K-pop industry that a gramophone-shaped trophy would be an added jewel for the K-pop megastar who bagged two of the three largest music awards in the United States last year.

The band members also did not hide their desire to secure a Grammy.

“It’s an award (given based on) voting by peers in the music industry, so that means even so much,” team leader RM said in English during a red-carpet interview before the ceremony. “These two years were so exhausting and devastating, and if we get the Grammys, you know, it all pays back and pays off.” (Yonhap)/AP/JB