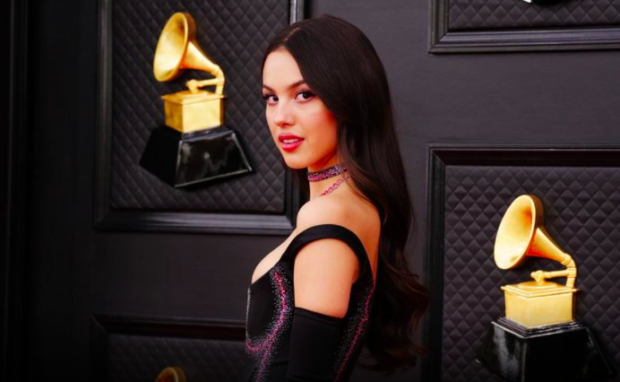 LAS VEGAS — Olivia Rodrigo, the teenage singer of heartbreak ballad “drivers license,” was crowned best new artist at the Grammy awards on Sunday but missed a chance to accomplish a rare sweep of the music industry’s top four awards.

The 19-year-old, who performed her signature hit while seated on the hood of a white Mercedes on the Grammys stage, triumphed over Saweetie, Glass Animals and others to win the new artist accolade at the televised ceremony in Las Vegas.

“This is my biggest dream come true. Thank you so much!” she said as she held her trophy.

Rodrigo was nominated for the top four Grammys: best new artist and song, record and album of the year.

But she lost out on at least one of those categories when song of the year went to Silk Sonic’s 1970s-inspired R&B song “Leave the Door Open.” The group, the duo of Bruno Mars and Anderson.Paak, performed the hit on stage to open awards show and returned minutes later to accept their trophy.

“Because of you guys, me and Andy are going to be singing this song forever,” Mars said.

The highest honors in music were postponed from January during a spike in COVID-19 cases and moved from Los Angeles to the MGM Grand Garden Arena in Las Vegas.

Host Trevor Noah urged the audience to think of the evening as “a concert where we are handing out awards.”

“We are going to be keeping people’s names out of our mouths,” Noah added, a jab about last Sunday’s Oscars slap by actor Will Smith, who told comedian Chris Rock not to mention his wife’s name.

Jon Batiste, a multi-genre artist who went into the day with a leading 11 nominations, landed four awards handed out before the televised ceremony. They included best music video for “Freedom,” a vibrantly colored tribute to New Orleans.

“I am so grateful for the gifts God has given me and the ability to share that for the love of humankind,” Batiste said.

Competitors for the coveted album of the year accolade include Rodrigo’s “Sour,” Kanye West’s “Donda,” Batiste’s “We Are,” and Tony Bennett and Lady Gaga’s “Love for Sale.”

Justin Bieber’s “Justice” also is in the mix, along with Doja Cat’s “Planet Her,” H.E.R.’s “Back of My Mind,” Lil Nas X’s “Montero” and Taylor Swift’s “Evermore.”

Winners are chosen by some 11,000 voting members of the Recording Academy. JB