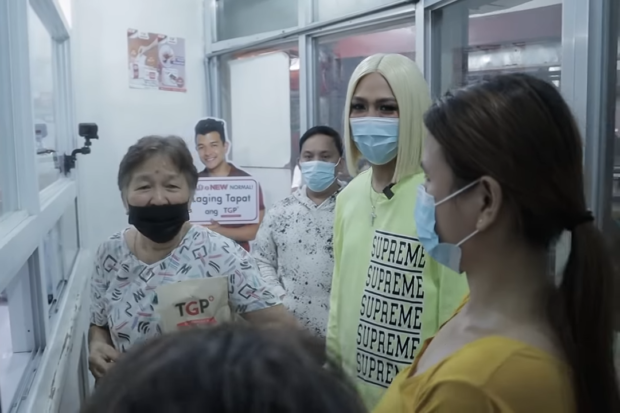 Vice Ganda with random strangers at a pharmacy (Image: screengrab from YouTube/Vice Ganda)

Vice Ganda has extended help to random strangers by paying for the medicines they bought at a pharmacy.

The comedian and “It’s Showtime” host got to meet customers at a pharmacy, where he treated some of them to a month’s supply of maintenance medicine for hypertension or diabetes, as seen on his YouTube vlog yesterday, March 23.

According to Vice Ganda, he believes his treat to random strangers is a way of giving good vibes since the money that people spend for medicine can be used for other needs.

(Finding the money to buy medicine is a big headache for a lot of people. So now, we’re going to spread good vibes so that somehow, we can make people who buy at the pharmacy smile. Those who buy medicine, we will pay [for what they bought] to reduce their expenses today, their worries.)

For Vice Ganda, the blessings he receives are already more than what he needs.

“‘Yung mga binibigay sa’kin ni Lord, sobrang dami doon sa pangangailangan ko kaya sabi ko, ‘Hindi sa ‘kin ‘to lahat. Idinadaan sa ‘kin ‘to kaya kailangan i-share ito,'” he told fans. (What the Lord gives me is way more than what I need, so I think, “This is not all mine. I’m just a channel, so I need to share it.”)

Vice Ganda revealed last month that he and his boyfriend Ion Perez had a wedding commitment ceremony in Las Vegas in October 2021. The comedian also teased his return to movies after two years, stating on “It’s Showtime” last March 11 that he had met with ABS-CBN’s Star Magic.  /ra