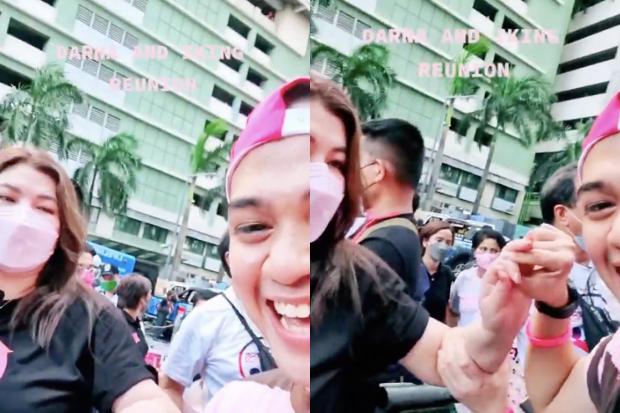 Angel Locsin had a quick reunion with her “Darna” co-star Francis Magundayao during the recent campaign rally of Vice President Leni Robredo and her running mate Sen. Francis “Kiko” Pangilinan in Pasig City.

The young actor, who played Darna’s sidekick Iking in the 2005 GMA TV series, showed a video of himself at the said gathering where he can be heard shouting “Darna” while Locsin is in the crowd in front of him, as seen on his Instagram page last Sunday, March 20.

Magundayao also got to interact with Locsin, who recognized him after he told the actress his name is Iking.

“Hello po, Iking,” he introduced himself, taking off his face mask.

“Oh my God! Halika pumasok ka dito (Come here, get in)!” Locsin said to him, as there was a metal barrier in between them.

Locsin then gave Magundayao a high five while the actor introduced his girlfriend to her, and the two shook hands.

Locsin recently showed herself fan girling upon meeting Robredo at the Pasig campaign rally. At the time, the actress brought a banner stating “Ma’am Leni sa ‘yo na ang bato (Ma’am Leni, the stone is yours),” referring to the power-giving stone in “Darna.”

The event also caught the attention of American pop star Ariana Grande, after a video of those in the rally singing her hit song “Break Free” went viral online.

Pasig City Police stated that the campaign rally was attended by an estimated 137,000 people, making it the largest crowd gathered by the tandem so far.  /ra