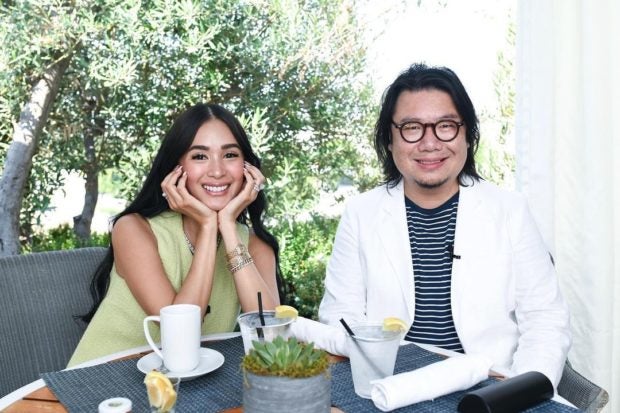 Heart Evangelista’s audition for the 2018 film “Crazy Rich Asians” was apparently far more special as it was requested by the original book’s author Kevin Kwan himself—and the actress had had no clue he wanted her in the movie.

The actress revealed this to fans by showing her conversation with Kwan in her YouTube vlog yesterday, Feb. 4. The vlog features one of her most recent trips to Los Angeles, California.

“A lot of people are asking and you know, it’s been so long. How did we meet? How did we connect? How did it happen?” Evangelista asked Kwan.

“Well, let’s reverse this. Let’s rewind it even more because I have requested that we get you to audition,” Kwan answered.

Evangelista appeared to be taken by surprise because of the revelation and told Kwan, “What? I didn’t know that.”

While it was not made immediately clear what movie the author was referring to, Evangelista clarified in a later Twitter post that Kwan was talking about “Crazy Rich Asians.” She replied to one @JoshuaPayapag who appeared to have some questions about her vlog.

“Wait Kevin requested Heart to audition? Then she didn’t know?” he asked. “Sayang (What a pity)! ‘Crazy Rich [Asians]’ could’ve been impeccable kung [na-cast si Heart] (if Heart was cast).”

“Yes. I didn’t know!” Evangelista said to the netizen.

Evangelista revealed last year that she indeed tried for a role in “Crazy Rich Asians.” She auditioned for the character Araminta Lee, which was given to Japanese-British actress Sonoya Mizuno.

Though Evangelista did not make it into the movie, fellow Filipino actress Kris Aquino appeared in the film as Princess Intan.

Evangelista has no hard feelings over not getting the role as she and Kwan eventually became friends. They collaborated on the 2018 “Crazy Rich Asians” feature for the magazine Harper’s Bazaar. The author named Evangelista a real-life “crazy rich Asian” alongside fellow Asian personalities.

More than a year after them first working together, Kwan also wrote the foreword of Evangelista’s fashion book “Styled With Heart.”  /ra