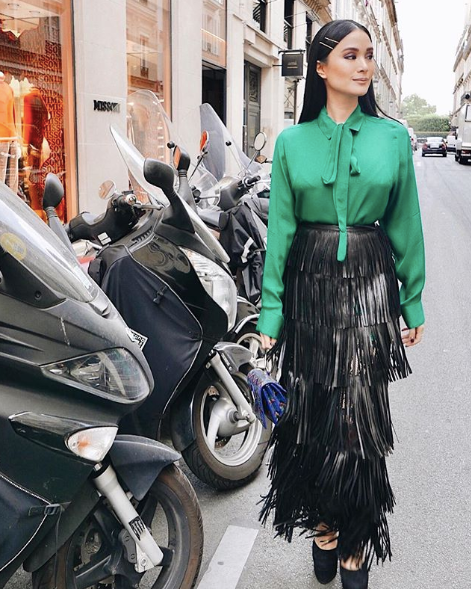 Heart Evangelista may not have made it through auditions to the highly anticipated “Crazy Rich Asians” movie—but author Kevin Kwan has acknowledged her as an example of the true-to-life high-living Asians he writes about in his books.

In a video of their trips to fashion shows, Kwan described the secret world of Asians “who spend millions of dollars a year on the finest things in life.”

Haute couture dresses can cost up to millions of dollars as they are one-of-a-kind and custom-fitted to clients. “Only about 2,000 women in the world can afford to dress this way,” he revealed.

Kwan hailed Evangelista as “the darling of the Philippines. She’s one of the most acclaimed actresses.”

He also praised her for her artwork including her famous paintings on Birkin bags, which all began because of a ketchup stain.

Aside from showing them in the most stunning couture creations, the video also showed the four fashionable women bonding over their love for haute couture, proving that their desire for these clothes is more than just the label.

“Couture is really special because it celebrates the highest level of craftsmanship and creativity,” said Michelle Yeoh.

Evangelista took to Instagram to share the news of her feature: “My last trip to Paris was a very special one because not only was I there for couture week but I had been invited by @kevinkwanbooks [Kevin Kwan] who has now become a dear friend!”

“I had the honor of being featured alongside some of the most incredible and stylish Asian icons. I am beyond grateful to Kevin and the entire Harpers team for being such a dream to work with!”

Kwan’s novel “Crazy Rich Asians” has been adapted into a movie, which premieres on Aug. 22 in the Philippines.  /ra

Thanks to a food stain, Heart Evangelista has a thriving career as a painter–of Birkin bags