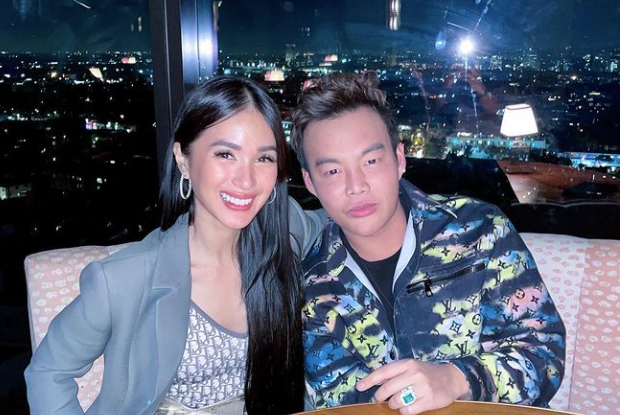 Heart Evangelista got to spend time with “Bling Empire” star Kane Lim in Los Angeles for his birthday, months after they were first seen bonding.

The actress, who is speculated to be part of the second season of “Bling Empire,” showed herself with Lim on her Instagram page today, Dec. 6. The two both looked stylish in their reunion, with Evangelista donning a gray blazer and Dior top while Lim wore a black designer jacket.

The pair’s reunion comes months after they were first seen together in New York earlier this year, leading fans to speculate that Evangelista may have been cast for the second season of “Bling Empire.” Evangelista has neither confirmed nor denied the said speculations.

“Bling Empire” is a reality series that follows the lives of true crazy rich Asians. It has an all-Asian cast including Lim, heiress Anna Shay, DJ Kim Lee and model Kevin Kreider. The series was renewed for a second season last March.

It appears Evangelista has been staying in California over the past few days, as she showed herself shopping with her father Reynaldo Ongpauco and walking down the streets of Los Angeles recently on her Instagram page.

She has been keeping herself busy lately with managing her own luxury wellness brand and releasing her first NFTs. Aside from Lim, the actress is also friends with “Crazy Rich Asian” author Kevin Kwan and Incubus frontman Brandon Boyd. JB

Read Next
Want to spend a night in the ‘Home Alone’ house? You might be able to
EDITORS' PICK
Honolulu Café is the cure for your Egg Tarts and Roastings cravings
Metro Manila vehicular volume may breach pre-pandemic level by June — MMDA
UNFPA PH is looking to fill two National posts
Omicron BA.2.12.1 in PH: What you need to know
Duterte names 2 new CA justices
House energy committee chair Arroyo bats for cheap electricity
MOST READ
Robredo’s daughter calls out netizens making fun of red-tagging, martial law atrocities
Omicron BA.2.12.1 in PH: What you need to know
No Marcos appointments to High Court until 2025
GMA Network sees no future legal entanglements with Marcos gov’t
Don't miss out on the latest news and information.