WATCH: Batman and Catwoman sizzle with chemistry in new ‘The Batman’ trailer 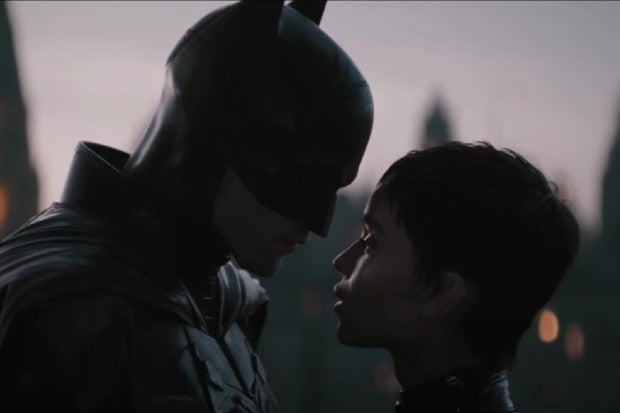 “The Batman” has dropped yet another trailer, this time giving fans a glimpse of the allegiance and animosity between Bruce Wayne (Robert Pattinson) and Selina Kyle (Zoë Kravitz), also known as Catwoman.

“The Bat and The Cat” trailer focused on the tense exchanges between the two characters, starting with Kyle convincing Wayne to stand up against the film’s antagonist, The Riddler (Paul Dano), as seen on Warner Bros. Pictures’ YouTube channel today, Dec. 28. In contrast, it also showed a fiery fight from the two characters which finished with them atop each other on a table.

Not all aspects of their relationship was projected to be dark though. A lighter scene was also featured, where Wayne visits what appears to be Kyle’s apartment, noting that she has a lot of cats.

“I have a thing about strays,” quipped Kyle, holding a glass of milk.

The trailer also teased more tricks from The Riddler, though it still concealed the character’s final look. The antagonist appears to have an affinity for video calls, communicating with the Caped Crusader mostly through them within the trailer’s 2-minute and 38-second run time.

The new trailer also showed a number of action scenes, from a car chase with the Batmobile to a series of Gotham city explosions that ended up flooding the city. It concluded with what appeared to be Wayne and Kyle coming together to defeat a group of men with guns.

Directed by Matt Reeves, “The Batman” will be arriving in theaters on March 4, 2022. Joining Pattinson and Kravitz are Andy Serkis as Alfred, Colin Farrell as the Penguin and Jeffrey Wright as Gotham City police’s James Gordon. JB