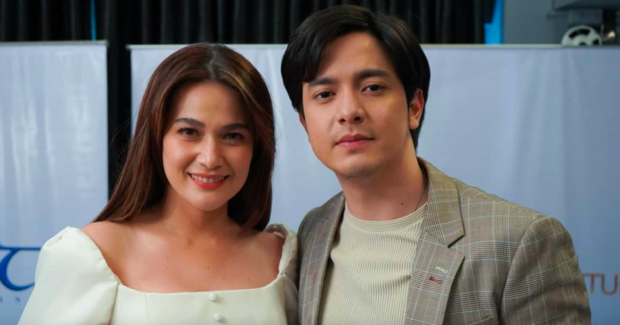 Alden Richards and Bea Alonzo are about to start filming for their first movie together this month, almost a year after the project was announced.

The upcoming movie, which is a Philippine adaptation of the Korean film “A Moment to Remember,” will now reportedly be titled “Special Memory.” Richards and Alonzo signed their contracts for the film in March, though talks about the project were reported as early as December last year.

Richards said in August 2020 that it was his dream to work with Alonzo in a movie, admitting that she is “one of his idols” and that he is a fan of her pairing with actor John Lloyd Cruz.

“A Moment to Remember” tells the story of a couple who face hardships as a result of Alzheimer’s disease suffered by one of the characters. It is based on the 2001 Japanese drama “Pure Soul.”

Richards will be playing the character of Korean actor Jung Woo-sung, while Alonzo will be taking the role played by actress Son Ye-jin.  /ra

Read Next
‘Rust’ script never called for Baldwin gun to be fired, lawsuit alleges
EDITORS' PICK
Comelec division junks petition to cancel Marcos COC for president
Acer starts the year off strong with the Aspire Vero National Geographic Edition
PH logs 37,070 more COVID-19 cases; over 33K others recover
‘Not yet the end’: Lawyer says Marcos Jr’s DQ cases to take lengthy process
The best of bayside and city living at SMDC’s Sail Residences
Over 3 Million worth of prizes to be won at Smart Padala’s SENDali Manalo Promo!
MOST READ
NBI foils escape attempt of Kerwin Espinosa, two others
Marcos camp ‘extends hand of unity’ after COC cancellation bid is thrown out
Wendell Ramos finally gets to hold his newborn for the 1st time
No vaccine, no French Open for Djokovic, says French Sports ministry
Don't miss out on the latest news and information.