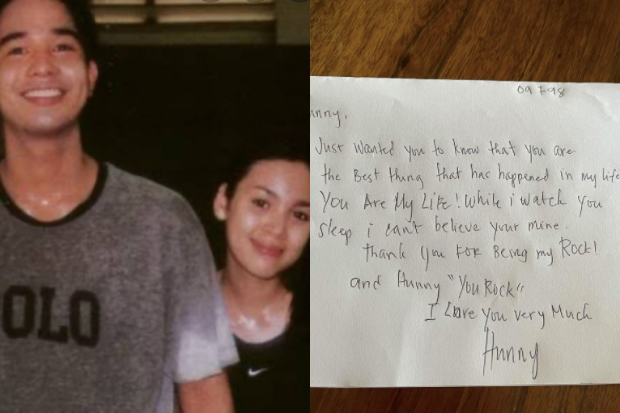 Claudine Barretto defended herself from those questioning the authenticity of a letter she showed from her late ex-boyfriend actor Rico Yan, stressing that the note was not written by her.

The actress gave fans a glimpse of a September 1998 letter from Yan yesterday, Nov. 16. In the handwritten note, Yan expressed his love for Barretto, telling her that she is “[his] life.”

Some netizens appeared to have doubted the authenticity of the letter, as they pointed out that the note does not look like it bears Yan’s penmanship.

One @amandagriff2021 asked Barretto yesterday if she was the one who wrote the letter, noting that the paper shown by the actress does not look faded.

“Kita ko lang po na same penmanship nung letter na binigay mo for your [mom] (I saw that this has the same penmanship as the letter your gave to your mom) and it’s different from Rico’s. And the paper looks new when it’s been [19 years] since he passed away,” the netizen said. “Just [want to ask] if [you] did write this and pinost or cinopy n’yo lang (posted it or you just copied it).”

Barretto then responded to the netizen, also yesterday, telling them, “No, not my writing.” 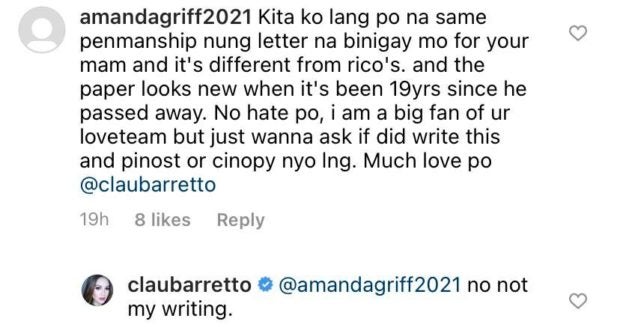 The same netizen then replied to Barretto, saying the letter looks like it shows the actress’ penmanship instead.

“It is your penmanship po Miss Clau, I think, but did he somehow [write] or [say] this to you?” the netizen said to Barretto.

“My penmanship po is [Assumption] penmanship,” Barretto clarified, referring to the cursive writing of graduates from Assumption schools.

One @ayarpyow, meanwhile, asked Barretto to clarify if Yan indeed wrote the letter and the actress answered affirmatively.

Barretto and Yan were love team partners in the late 1990s. They starred in hit movies together such as “Flames: The Movie,” “Got 2 Believe” and “Dahil Mahal na Mahal Kita,” among others. Their on-screen romance eventually led to an off-screen relationship.

Even with children of her own, Barretto still feels sentimental over the late actor. She used Yan’s old blanket for her youngest son Noah and visited the actor’s grave when his father died in October 2019. The actress also paid tribute to him on what would have been his 46th birthday last March.

Yan was found dead in a resort in Palawan back in 2002. Cardiac arrest was cited as the cause of his death. He was 27 years old.  /ra