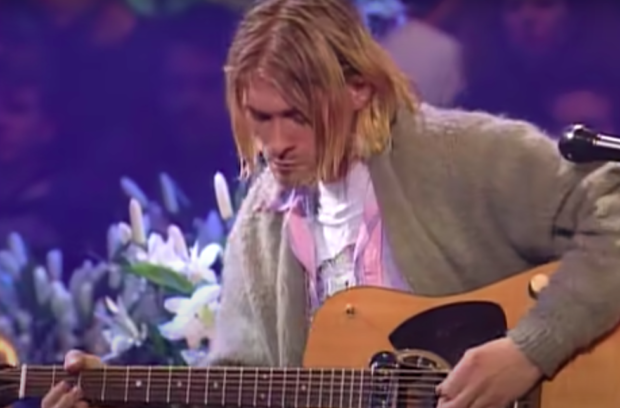 Kurt Cobain of Nirvana in “MTV Unplugged”. Image: screengrab from video of “The Man Who Sold the World” via YouTube/Nirvana

“And I think that’s a conservative estimate,” said Martin Nolan, executive director of the house.

“The collectible on the art market right now; it’s very, very hot, these prices are going through the roof,” he told AFP during a preview of the auction that will include some 1,000 pieces.

The 76-year-old Englishman Clapton, who in recent years has made a very public turn to far-right conservatism by taking an ardent anti-COVID-19 vaccination stance and facing accusations of racism, played the guitar during the 1970 debut live concert performance of Derek and The Dominos, the group he founded that was behind the classic “Layla.” 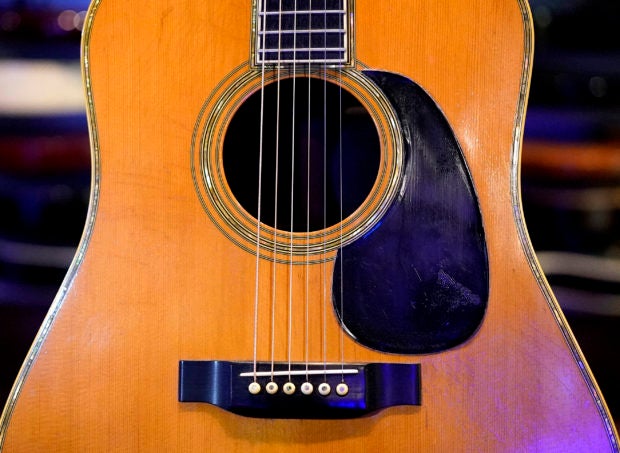 Asked if Julien’s considered the controversy surrounding Clapton in choosing to highlight items connected to the rock star, Nolan said, “There will always be something controversial.”

“I could go down the list with every star that’s represented here,” he said. “We don’t focus on that; we focus on what’s good, the amazing music that they’ve given us for many, many decades.”

Also included in the two-day auction is a handwritten setlist from Nirvana frontman Kurt Cobain. He scrawled songs including “Come As You Are” and “About A Girl” on a tablecloth he signed along with bandmates Dave Grohl and Krist Novoselic.

Last year at Julien’s annual event, a retro acoustic-electric guitar the late star played during the legendary 1993 MTV Unplugged performance snagged a record $6 million, the most expensive guitar ever sold at auction.

The year prior, the cigarette-singed cardigan that grunge’s reluctant poster boy wore during that same performance went for $334,000.

Several outfits worn on stage by the late American pop diva Whitney Houston are also going under the hammer, along with a plaid and paisley print Gianni Versace jacket and matching velvet trousers. Julien’s estimates the ensemble, which the superstar wore circa 1992, could go for $3,000 to $5,000.

Read Next
Claudine Barretto asserts old love letter from Rico Yan not written by her
EDITORS' PICK
Municipal court in Pangasinan sets arraignment for ‘Lolo Narding’
Gov’t eyeing COVID-19 tests in pharmacies
Acer starts the year off strong with the Aspire Vero National Geographic Edition
Gear up and get ready to play with Yamaha Mio Gear
31,173 new COVID-19 cases push PH’s active tally to 275,364
Mobile COVID-19 vaccination for commuters, transport workers set at PITX
MOST READ
Imelda Marcos trends on Twitter after octogenarian jailed for allegedly stealing mangoes
Octogenarian jailed for ‘stealing mangoes’ freed after people chip in for bail
If elected VP, Sara Duterte will push for mandatory military service for all Filipinos
Help pours in for octogenarian jailed for ‘stealing’ mangoes in Pangasinan
Don't miss out on the latest news and information.