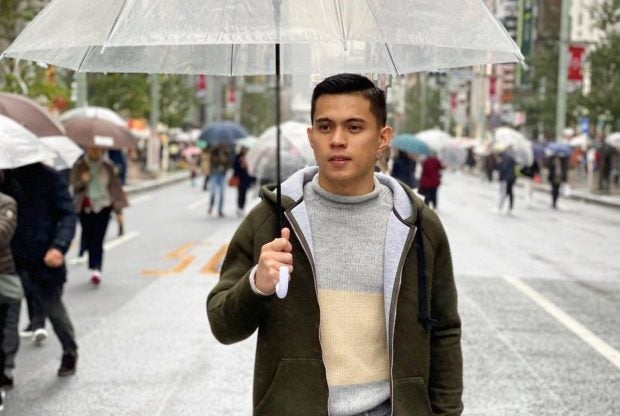 Former “Tawag ng Tanghalan” finalist Anton Antenorcruz admitted that he has no regrets about marrying at a young age, as the decision helped him with his life choices now.

The singer, who was a contestant in the “It’s Showtime” segment “Tawag ng Tanghalan” back in 2017, admitted that he was saddened over how information about his past marriage with chef John Carasig resurfaced while he was competing in the talent competition. He also recounted the events in his interview with TV host Boy Abunda yesterday, Nov. 10.

The interview was held in person near the Brooklyn Bridge in New York, where Antenorcruz is staying for the 11th edition of The Outstanding Filipinos in America Annual Awards.

“Malungkot ako na naungkat siya ulit pero thankful ako kasi nu’ng time na nangyari ‘yun, parang naprepare na ako sa controversy,” he told Abunda. (I’m sad that it is being dug up, but also thankful because at the time it happened, it was like I was already prepared for controversy.)

Despite the heartbreak he experienced from his past, Antenorcruz is not closing his doors on tying the knot again with another special someone. He added that he also has no regrets over getting married since it helped him in his decision-making now.

“Parang ayaw ko na. Kung i-ask ako, why not? Kung hindi, okay lang din,” he said. “I don’t regret it kasi marami akong natutunan from it.” (It’s like I don’t want to anymore. If I get asked, why not? If not, that’s still okay. I don’t regret it because I learned a lot from it.)

The singer then opened up on his gender identity and his struggles when he denied it early into his career.

He said that initially he felt that hiding his sexual orientation was the right thing to do, so he refused to admit being a member of the LGBTQ+ community. However, this affected his performances, which led to him being eliminated from a contest.

“Nalungkot talaga ako na na-eliminate ako agad, then may nagsabi sakin na ‘di ka kasi nagpakatotoo,'” he recounted. (I felt really sad that I was eliminated. Then someone told me that it was because I was not being true to myself.)

Antenorcruz carried this lesson when he entered “Tawag ng Tanghalan,” which led him to open up to his fans. He stressed that he no longer feels the need to deny he is gay.

“Kung ayaw nila, okay. Kung gusto nila, eh di swerte ako kasi they stayed. And a lot of them did stay,” he said. (If they don’t want it, it’s okay. If they like it, then I’m lucky because they stayed.)

Antenorcruz made it to the grand finals of the second season of “Tawag ng Tanghalan.” He placed fourth in the competition, which was won by Janine Berdin.  /ra

Jesi Corcuera shows chest scars from surgery as trans man, speaks up on being ‘free’