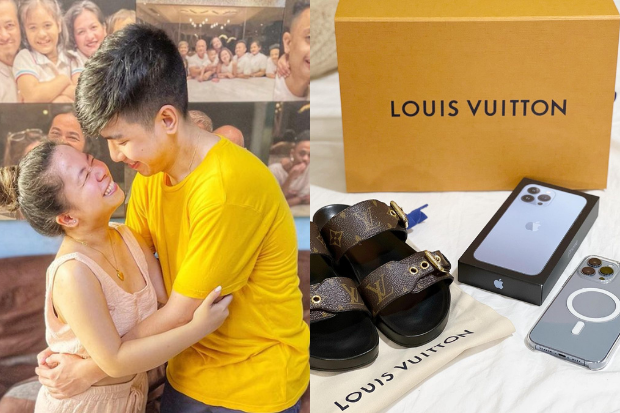 Kiray Celis came to the defense of her non-showbiz boyfriend after he was criticized for buying her a pair of designer footwear and a smartphone as early Christmas gifts.

The “Goin’ Bulilit” alum told fans that her boyfriend, gaming streamer Stephan Estopia, gifted her with brown Louis Vuitton sandals and an iPhone 13  last Sunday, Nov. 7. This led several netizens to throw negative remarks at the couple, a matter that Celis addressed on her Instagram page last Tuesday, Nov. 9.

Celis said that some people have told her and Estopia that love is not based on gifts and that a man can still cheat even if he buys her partner expensive things. The actress also received comments claiming that she actually bought the sandals and smartphone.

(Yes, the Louis Vuitton sandals and the iPhone 13 are expensive for Stephan Estopia to gift me with. His salary from gaming and his endorsements is just enough [to buy these], but that does not stop him he said from giving me everything that I want.)

She then expressed gratefulness for her boyfriend for always showing her how much he loves her.

(I thank my boyfriend because even though he does not need to prove himself to you — and because you are all so narrowminded that you say I always do the spending, I bought the items — he still does these things.)

(Thank you because in all my life, my priority has mostly been the things that my family needs. Sometimes I forget about myself, but you always make me feel that I deserve everything because I am a good, hardworking person.)

Aside from the new brown sandals, Celis also received a pair of white designer footware from Estopia on her birthday last July. The gaming streamer also showed his love for the actress by getting a tattoo of her eyes on his chest last September.

Celis first introduced Estopia to the public back in December 2019, when she opened up to fans that she finally felt what it is like to be truly loved.  /ra