‘On the Job: The Missing 8’ will be screening at New York's Museum of Modern Art | Inquirer Entertainment
Close
menu
search

‘On the Job: The Missing 8’ will be screening at New York’s Museum of Modern Art 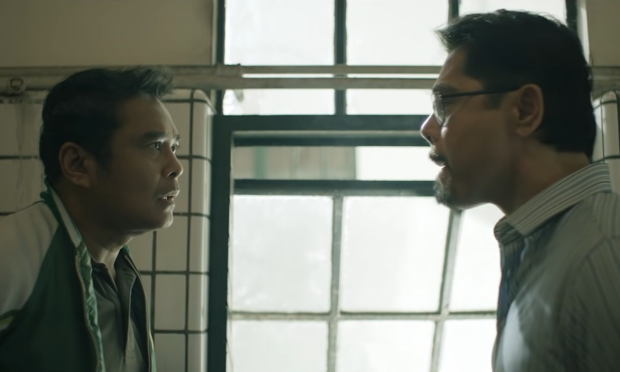 John Arcilla and Christopher de Leon in “On the Job: The Missing 8.” Image: screengrab from YouTube/Reality Entertainment

Erik Matti’s acclaimed crime thriller film “On the Job: The Missing 8” is set to reach North American audiences for the first time, as it was chosen as one of the films to be exhibited in New York City’s Museum of Modern Art.

The director announced that the film, which first premiered at the Venice International Film Festival last September, was selected for the museum’s January 2022 exhibition, as seen on his Facebook page yesterday, Nov. 10.

“The Museum of Modern Art (MOMA) in New York will be screening this year’s best films this coming December and January. To greet the New Year of 2022, ‘On The Job: The Missing 8’ will be screening on Jan. 2,” Matti said.

He then recalled that the 2013 original “On the Job” film was also screened at the MOMA in the past, though he was not able to come to the screening.

“This time I will be introducing the film and will have a [question-and-answer] after the screening. It will be such an honor,” Matti told fans. “Friends and relatives in New York and the [United] States, come join us as we screen the film for the first time in North America.”

The Museum of Modern Art (MOMA) in New York will be screening this year’s best films this coming December and January….

“On the Job: The Missing 8” stars John Arcilla, Dennis Trillo, Christopher de Leon, Leo Martinez and Joey Marquez, among others. It tells the story of a journalist named Sisoy Salas (Arcilla), who looks into the disappearances of his colleagues.

Arcilla was hailed as Best Actor at the Venice International Film Festival for his performance in the film. He is the first Southeast Asian actor to win the said honor, also dubbed the Volpi Cup.

“On the Job: The Missing 8” is a sequel to the also internationally-acclaimed “On the Job,” which starred Gerald Anderson and Joel Torre. JB

Read Next
Elton John receives elite royal honor from Prince Charles
EDITORS' PICK
Metro Manila’s daily COVID-19 growth rate drops to 2% — Octa Research
Over 3 Million worth of prizes to be won at Smart Padala’s SENDali Manalo Promo!
SMDC’s Bloom Residences: A master planned community that cares for your health and wellness
What to expect as Metro Manila starts ‘no vaccination, no ride’ policy on Monday
COVID-19 cases in PH pass 3.2 million mark with 37,154 new cases — DOH
Upsilon, Unilever give ‘real talk’ on climate change crisis
MOST READ
IATF protocols now apply to travelers who arrived on or before Jan. 13
‘Not my loss’: Did Kris Aquino just comment on her breakup with Mel Sarmiento?
Thailand records first Omicron death
Tito, Vic and Joey still not quitting, breaking trends as they celebrate 50th year in the biz
Don't miss out on the latest news and information.