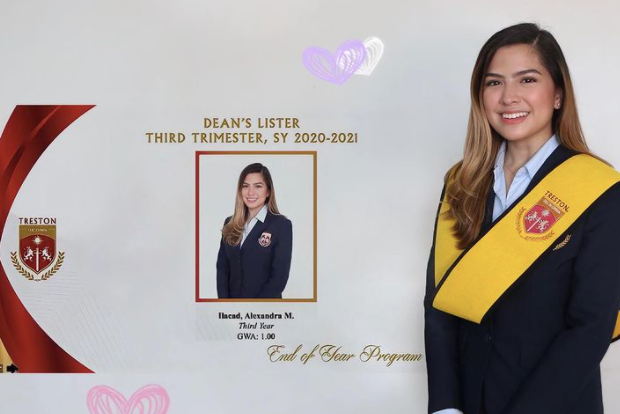 Alexa Ilacad is set to graduate with a marketing degree after she finally finished her last term in college with an average grade of 1.00.

The actress announced the good news by showing her general weighted average and a photo of herself, indicating that she was a dean’s lister, on her Instagram page yesterday, Aug. 2.

“Last hoorah for my last term in college. I am over the moon as I type this right now but finally… I am graduating!” Ilacad said, accompanied by the hashtags “#MarketingMajor” and “#Gradwaiting.”

“Despite all the obstacles thrown my way, I was determined to finish strong,” she added. “I came, I studied, I conquered!”

Ilacad is enrolled in Treston International College’s School of Business and Technology, where she has been part of the dean’s list since her sophomore year.

Ilacad’s announcement led to playful remarks about the 2020 film “Four Sisters Before the Wedding,” which was the prequel to the 2013 comedy-drama film “Four Sisters and a Wedding.” In the movie, Ilacad played the teenage academic achiever Bobbie Salazar.

One @ilovebelle10 jokingly expressed envy after Ilacad showed her academic achievement to her fans, making a reference to the character.

“Bobbie! Ba’t nasa’yo na ang lahat?” the netizen asked Ilacad. (Bobbie, why do you have everything?)