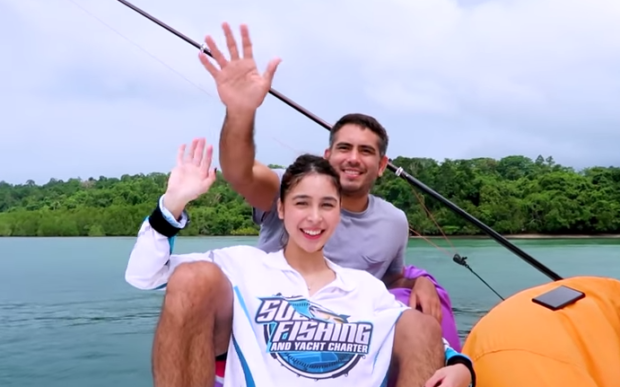 Gerald Anderson and Julia Barretto have set sail to the open seas for another boating trip, this time with the actress’ family joining their adventure.

Julia’s mother, actress Marjorie Barretto, her youngest sister Erich and some of Anderson’s friends went with the couple in their getaway, as seen on the actor’s YouTube vlog yesterday, July 11.

“We’re going to be sailing the high seas of Subic Bay! The not-so-high seas,” Anderson said. “[The weather’s] not so good pero okay na rin kasi mahangin.” (The weather’s not so good but that’s okay because it’s windy.)

Anderson and Barretto went fishing, lounging on the yacht and swimming during the trip, while Marjorie and Erich showed off the fish they caught for the day.

Julia then showed off parts of the yacht, which she revealed was the same boat they used when they went deep sea fishing off the coast of Zambales. The group also swam in a nearby beach to relax, went kayaking and skipped rocks.

“[It’s a] nice spot, pwedeng mag-chill and relax. We’re out here, just enjoying,” Anderson said, describing a beach they swam to from their boat.

Anderson confirmed his relationship with Barretto in a tell-all interview with TV host Boy Abunda last March, an admission that he said gave him peace of mind. The couple had since gone on several trips and had their COVID-19 vaccines together. JB