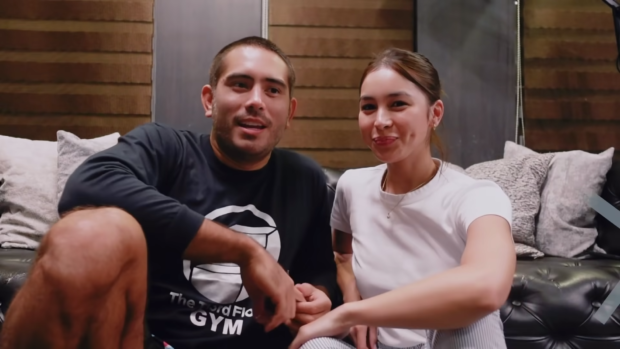 Julia Barretto told her boyfriend Gerald Anderson that she plans to have a family in five years, and is willing to leave showbiz to live a quiet life.

Barretto answered questions from Anderson when she appeared as a “special guest” in his YouTube vlog yesterday, April 21, where they also sampled different kinds of Filipino street food.

Anderson asked Barretto about her five to 10-year plan, and Barretto was quick to answer, “Family.”

“Next year,” she quipped, which was met by a chuckle from Anderson. But she eventually said she plans to have a family in five years.

“I always dream of living a simple quiet life, a family life,” she stated, saying that she is willing to step away from show business to live a “normal life.”

She added that as the eldest daughter of Marjorie Barretto and Dennis Padilla, she thought show business was also the kind of life she was meant to live.

“I feel like, at an early age, I was already exposed to this life because I grew up with aunts [taking] me to their work, my dad, my mom. It was kind of like the only life I knew,” she said. “I felt like that’s where I was gonna end up now. But in the future, a simple quiet life is my dream.”

Anderson confirmed his relationship with Barretto last month, a revelation that he said gave him peace of mind. The couple was recently seen on a fishing trip in the West Philippine Sea. JB