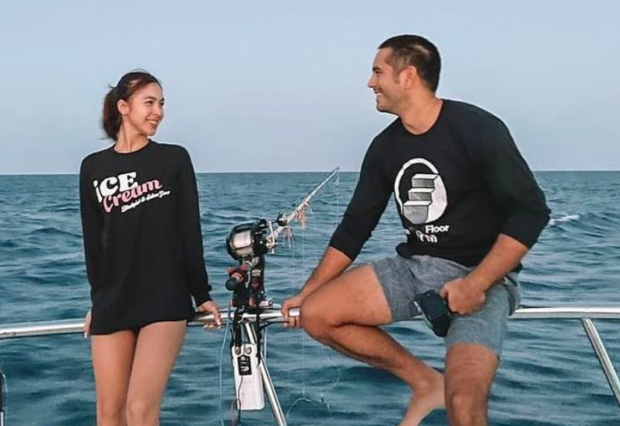 Gerald Anderson and Julia Barretto set sail to the open seas for a fishing trip, more than a month since they confirmed their relationship.

“The best things in life come with patience,” the actor said as he showed some photos of the fish he caught from their sea trip on his Instagram page yesterday, April 13. He also showed a photo of him lounging with Barretto in a yacht. The couple is presumed to be off the coast of Zambales.

Anderson is also seen taking some photos of the sunset as he looks out to the sea in an earlier post, also yesterday.

“Enjoying the sunrise of our beautiful country in the West Philippine Sea,” he said.

Meanwhile, Barretto did not show a photo of them together but she did have a solo photo of herself standing barefoot on the yacht on her Instagram page on the same day.

After Anderson confirmed his relationship with Barretto, the couple had started becoming more open in their public displays of affection. The actor also revealed that he felt relieved when he finally got to admit that he is dating Barretto, saying the admission had something to do with his peace of mind. JB

Julia Barretto to Gerald Anderson: ‘Thank you for sharing your world to me’

Read Next
Rising Fil-Am hip-hop artist Guapdad 4000 on how being biracial inspires his artistry, working with Chance the Rapper and Charlie Wilson
EDITORS' PICK
OPINION: Mischief Reef – where it all started
POVA x Mobile Legends Bang Bang: A partnership that’s built to win
Infants bundled off; no one hurt in PGH fire
Tired of your Wi-Fi signal problems at home? Here’s a solution!
Fire-damaged PGH calls for donations
CPA Australia and their designation: Advance your career
MOST READ
Leonen impeachment case moves forward in House
Hot, humid weather for PH on Monday — Pagasa
Longest recession since Marcos era
Long working hours are a killer, WHO study shows
Don't miss out on the latest news and information.