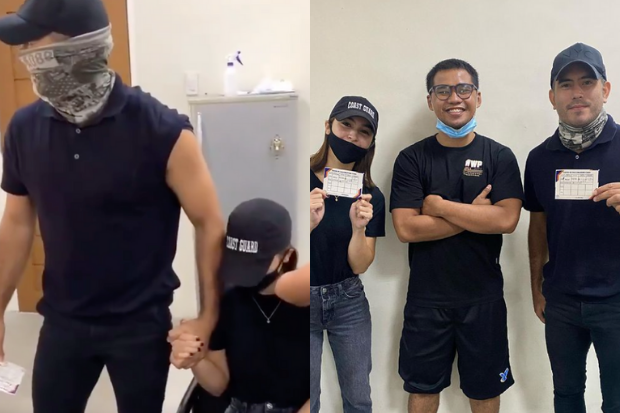 Julia Barretto and Gerald Anderson are now among the actors who have been vaccinated against COVID-19, as they have received their shots together.

The couple can be seen holding their vaccination cards as they posed with one @johanndoomlao, as shown on the netizen’s Instagram page on Friday, June 18. The netizen tagged the photo’s location to Marikina City, supposedly indicating that the couple received their vaccines there.

Videos of Barretto and Anderson getting their COVID-19 jabs also circulated among several fan pages online, such as in one @juralds.officialfanpage in Instagram.

Barretto admitted that she was nervous about getting the shot and can be seen holding Anderson’s hand as the vaccine was administered to her. This prompted the actor to tease her afterward, saying her grip on him was so tight that it hurt.

“Naramdaman ko ‘yon. Ang sakit ha,” he said in a video posted on the page yesterday.

Barretto then tried to scare Anderson when he was getting his shot, saying the needle that was used for his vaccine was quite big. But Anderson seemed calm and only flinched when he received his jab.

Anderson revealed his relationship with Barretto last March. They have since appeared in public together to distribute relief goods for the actor’s birthday and to go fishing at the West Philippine Sea, off the coast of Zambales. JB

Sharon Cuneta receives second dose of COVID-19 vaccine in US