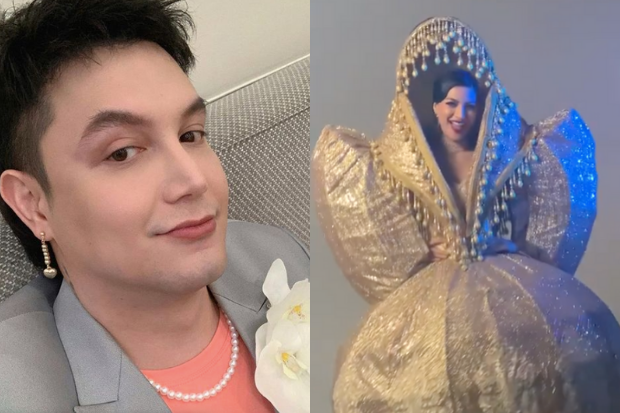 Paolo Ballesteros proudly showed off his Higantes festival-inspired design for the national costume of Binibining Pilipinas Rizal Honey Cartasano, as the beauty pageant draws near.

Ballesteros’ announcement also displayed a video of Cartasano modeling the massive blue and gold dress which was shaped like paper mache higantes.

Cartasano explained during the pageant’s national costume presentation that her gown was a “depiction of the traditional Maria Clara dress” made from piña fabric. She then showed the back of her costume, which had a replica of the face of a giant puppet, same with those paraded during the Higantes festival.

This is not the first time Ballesteros designed a national costume for a beauty pageant. He also designed a terno for Mutya ng Pilipinas 2018 candidate Agatha Romero.

The Binibining Pilipinas coronation night will be hosted by beauty queens Catriona Gray and Nicole Cordoves. It will be held at the Smart Araneta Coliseum on July 11.

Read Next
Chrissy Teigen apologizes again for ‘awful’ resurfaced tweets: ‘I was a troll, full stop’
EDITORS' PICK
Harnessing technology for quality education
Duterte: When I said I will fight drugs in 6 months, I thought it was like in Davao
Hidilyn Diaz wins weightlifting gold in Tokyo Olympics
Connect to PH’s fastest network with new Signature Plan Lite at only P599 per month
Duterte warns of possible lockdown if ‘more aggressive’ Delta variant spreads
Tips for a cheerful life
MOST READ
Hidilyn Diaz wins weightlifting gold in Tokyo Olympics
Go to war with China over West PH Sea? It will be a ‘massacre’, says Duterte
Hidilyn shoots not only for gold but also for permanent place in PH sports history
Duterte acclaims Sotto: ‘He can become a good vice president’
Don't miss out on the latest news and information.