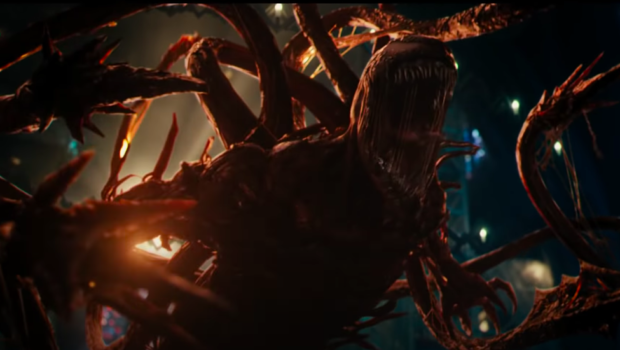 Carnage in the trailer for “Venom: Let There Be Carnage” (Image: screengrab from YouTube/Sony Pictures Entertainment)

The much-awaited sequel to 2018’s “Venom” with Tom Hardy has finally given fans the first look at the symbiote Carnage in its first trailer.

The red symbiote appears murderous as expected with Woody Harrelson’s serial killer Cletus Kasady as its host, as shown in the trailer posted under Sony Pictures Entertainment’s YouTube channel yesterday, May 10.

“Venom: Let There Be Carnage,” which was helmed by actor-director Andy Serkis, is set to hit theaters on Sept. 24.

“Welcome back, Eddie Brock. It’s been a long time. Missed you, so much,” the sinister Cletus Kasady says as the trailer teases the first reunion of the two. Eddie Brock visited the serial killer back in the post-credits scene of the first movie.

It also appears that Cletus Kasady is set to be executed via lethal injection, but is saved by Carnage at the last minute, which is when all hell breaks loose.

Although he is seen destroying vehicles and a helicopter in the trailer, fans are only given a few seconds to take a good look at Carnage in his red symbiote rampage.

Eddie Brock, meanwhile, seems to be trying to live a normal life – but fails miserably – with Venom, who is shown almost destroying the kitchen as he prepares breakfast for its human host.

Despite the chaos, Venom seems to have adjusted better to Earth since the last film—he now enjoys singing along with the radio and even craves chocolate—something he seemingly will not easily get his hands on, as seen in the trailer.

Before settling with a Sept. 24 release date, Venom and Carnage were originally expected to go toe to toe back in October 2020, but the film’s release was moved a couple of times because of the COVID-19 pandemic.  /ra