WATCH: Moira singing with ‘face shield on wheels’ gets mixed reaction on Twitter 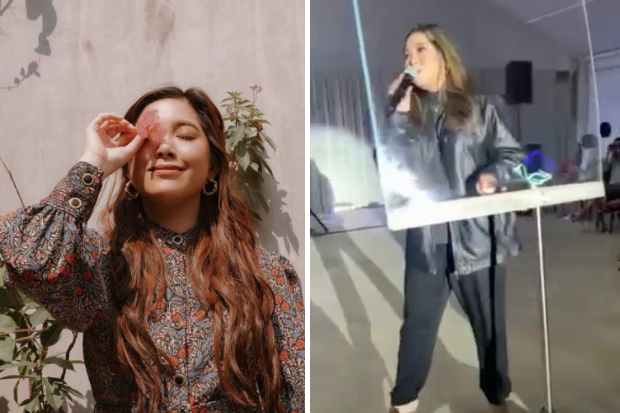 A clip of Moira Dela Torre’s performance has gained traction online after she used what appeared to be a clear barrier on wheels in an attempt to prevent COVID-19 infection.

Netizens seem to have found the singer-songwriter’s performance amusing, putting “Moira” on the top trending list on local Twitter today, May 11.

Twitter user @maroontito, for one, posted the said video with only a bunch of question marks as the caption and has gained over 8,800 likes and over 1,000 retweets as of this writing.

Dela Torre can be seen singing while pulling around a giant clear barrier attached to the legs of a swivel chair instead of wearing a face shield.

“FACE SHIELD ON WHEELS KAYO JAN!!!!! SIS MOIRA IS THE NEW INNOVATOR LOVE THAT FOR US!!!!” one Twitter user, meanwhile, posted, also sharing the video.

FACE SHIELD ON WHEELS KAYO JAN!!!!! SIS MOIRA IS THE NEW INNOVATOR LOVE THAT FOR US!!!! Don’t forget to vote for @BTS_twt #BBMAsTopSocial pic.twitter.com/EFh1xxNX1w

Another Twitter user with the handle @___0KUMURA likewise posted the same clip with the caption, “[Moira] living in 2050. [Face] shield pro max.”

Others, meanwhile, likened Dela Torre holding a huge barrier to that of the Lolita character in the game “Mobile Legends,” who has a skill that produces a giant shield as well.

“Moira tank build,” Twitter user @dailymively, meanwhile, posted, quoting another user’s Tweet that put photos from the said mobile game and from the Dela Torre video side by side.

Despite the giant shield, some netizens pointed out that Dela Torre still risked COVID-19 infection as she still ended up sharing her mic with a member of the audience at the event.

The video originated from a TikTok user with the handle @atenyochona, who appears to be the said audience member to whom Moira passed her mic on.

It was not disclosed what the event was or when it was held. Meanwhile, Dela Torre has yet to comment on the viral video as of this writing.  /ra