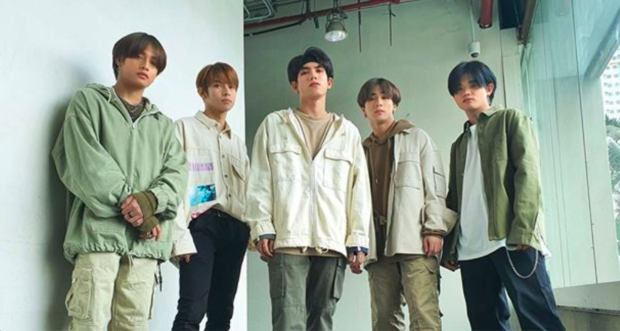 Members of P-pop group SB19 have paid tribute to their parents ahead of the release of their new song “MAPA” on May 16.

The young artists have taken to social media today, May 8, to post their heartwarming tributes to their mamas and papas, which seem to be the focus of the upcoming track.

Justin was the first to post his tribute under the official Twitter and Instagram pages of SB19, where he praised and thanked his mother for taking good care of him despite battling a skin disease.

(#DearMAPA, it has been six years since you were diagnosed with scleroderma. Every night, I could hear you cry. You could not sleep due to the pain you were feeling.)

(It hurt me to see you getting weakened and depressed over the struggles you were facing. But you still showed me that you could overcome it. You would force yourself to wake up early in the morning to prepare food for us before we went to work and school.)

(I can still remember when I asked you back then what your dream was when you were still young. You answered,  ‘It’s this. To have a happy family, a good home and a beautiful kitchen. Now, I understand; I know how much you love what you are doing and you never stopped doing it, because we were your dream.)

(Because of this, I became more inspired to fulfill both my and your dreams. You served as an inspiration to me and my siblings. Thank you very much for never giving up, Ma.)

SB19’s Josh was the second to share his tribute, which he also made to his mother as he remembered the first time they went out after five years of not seeing each other.

“#DearMAPA, isa ito sa mga di malilimutan na pagkakataon na nagkasama tayo,” Josh said in the post that came with a photo of him and his mother eating at a restaurant. (#DearMAPA, this is one of the times we were together that I will never forget.)

(It is not really our style to go out to eat because of our struggles in life. What our family went through is not normal, and I can say that it is one of the worst things one family can ever experience.)

(I needed to go away again for both my mental and emotional health. Until now, our family is still not in a good place. I know that you are struggling to fight because you are still being chased by your past.)

(This fight will not be easy. We have faced many challenges before and I believe that we will overcome this one as well. I want that this message will serve as your strength to continue the fight. Keep holding on and I got your back, Ma.)

SB19’s Ken then followed suit by paying tribute to both his mother and father as he assured them that they will see each other again soon.

“Mahal ko kayo, kahit di ko sinasabi to. Alagaan n’yo sarili n’yo. Balang araw magkikita tayo at makakasama ko kayo ulit,” Ken added in the post, which came with a photo of him and his mother.

(I love you, even though I did not say it. Take care of yourselves. Someday, we will finally see each other and be together again.)

Stell was the fourth of his SB19 co-members to post his tribute, which he likewise gave to both his mother and father.

(#DearMAPA, thank you for the life you gave me. It was not easy for you to attain the level of life we knew, but you did everything you could to help us and prepare us for life.)

(You made us realize that challenges and poverty were not going to stop us from reaching our dreams and that we cannot measure wealth when it comes to happiness.)

(Thank you, Ma and Pa. We love you very much. I hope you are happy with the life we have now, I have your back. Even if the world changes, I will still choose both of you as my Ma and Pa even in the next life.)

SB19’s Pablo was the last to post his tribute to his parents, whom he wholeheartedly thanked for everything they have done for him and his siblings.

(One day is not enough to thank you for everything that you have done and sacrificed for me and my siblings, Ma, Pa. We may not say this often but I, Kuya Keb, Josh, Chi and Mik love you very much.)

(We want to reciprocate all the love you gave us as you two are the most important people in our lives. We do not have control over time but I’d give anything just to give you back your strength and energy so you can spend more time with us.)

(We want to just take care of everything so you can rest and enjoy life without worrying about other things. That is all I want in life.)

(We love you very much, Ma and Pa. Papa, please take care over there, I know that you really want to go home. I hope that that day comes so we can be finally together again.)

SB19 will also seemingly give their fans – referred to as A’TIN – a chance to share their own tributes to their parents tomorrow, May 9, as shared on their scheduler posted on Twitter earlier today.

SB19 will be dropping their new song along with its lyric video on May 16. Around a week later, on May 24, SB19 will be vying for the Top Social Artist title at the 2021 Billboard Music Awards.

They will be going against American artist Ariana Grande and K-pop groups Blackpink, Seventeen and BTS. SB19 is the first Filipino act to be nominated in the said category.  /ra