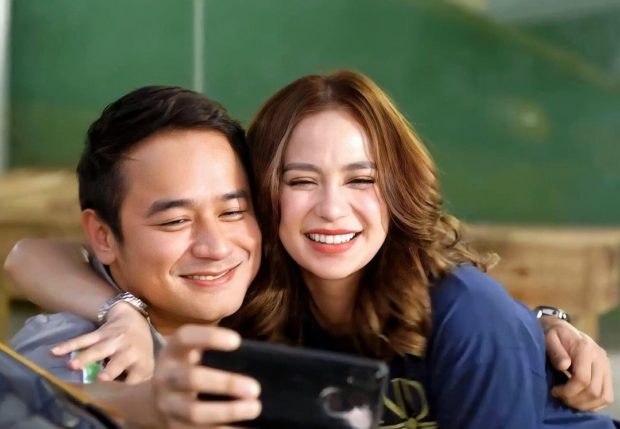 Arci Muñoz and JM de Guzman’s fans thought the actors have taken their relationship to the next level after years of being each other’s best friend — but it turned out that it was all a joke.

“Matagal na tayong mag-best friends pero, pwede bang manligaw?” de Guzman asked Muñoz in an Instagram video post by the actress yesterday, April 4. She also showed a photo from the same trip to Boracay with de Guzman and her family.

“Just really glad that the whole family was able to witness this beautiful moment,” Muñoz said and added “may forever” and “from best friends to lovers.” She also said there will be a vlog to be released on the following day with a “revelation.” This led their fans to think they are in a relationship.

But the video that she showed was actually part of a proposal for another member of Muñoz’s family, as seen in her vlog today, April 5. After de Guzman asked her if he could court her, he handed the flowers to Muñoz’s brother Manolet who then proposed to his girlfriend.

Some of their fans already thought the “revelation” that Muñoz was talking about was actually a prank, and their speculations turned out to be true since the video stopped with Manolet’s proposal.

Some fans expressed their disappointment online shortly after the vlog was released. One @G12ejorge said: “Yung pinakilig kami pero Hopia. Daya ni arci muñoz at jm de guzman. Kala ko talaga #frombestriendtolovers na sila.” (When they made you feel giddy but just left you hoping. Arci Muñoz and JM de Guzman are unfair. I really though they’re #frombestfriends to lovers.)

“Kainis. Kinikilig na ako kay Jm De Guzman at Arci Muñoz from bestfriend to lovers daw tas ganon,” another @jyilgan said. (Annoying. I was really happy for JM and Arci. They said “from best friends to lovers,” then they left us hanging.)

Muñoz was last known to be in a relationship with businessman Anthony Ng, while de Guzman’s most recent public relationship was with Jessy Mendiola, who is now married to Luis Manzano.

In 2019, Muñoz admitted that she did not consider a relationship with de Guzman because she thought he was gay and she wanted to focus on her studies before entering a relationship. The two have known each other before entering show business, first meeting in college as theater arts majors. JB

Arci Muñoz says BTS helped her get through heartbreak