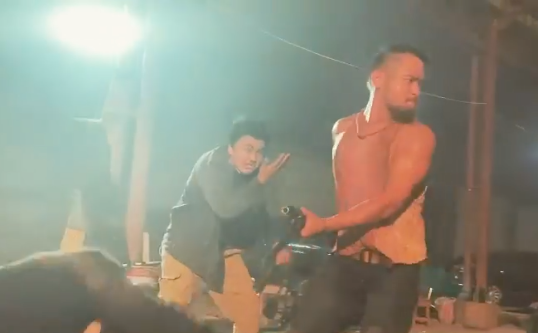 JM De Guzman has given fans an action-packed glimpse of what to expect from the upcoming Richard Somes film “Topakk.”

De Guzman, a real-life sergeant of the Philippine Air Force, showed off his hand-to-hand combat skills – albeit in a film – in the behind-the-scenes clips he shared on Instagram on Tuesday, Dec. 22.

The video clips showed a bloody and beat-up De Guzman fighting several henchmen as he switches from firing his shotgun to hitting enemies with it—all the while rock music playing in the background.

In one post, a bloodied De Guzman takes what appears to be a triumphant walk along a wrecked and fiery path, shotgun in hand.

De Guzman is joined by fellow actors Sid Lucero and Paolo Paraiso in the said film.

Even as he is working on “Toppak,” De Guzman is set to star in the upcoming teleserye “Init ng Magdamag” with Gerald Anderson and Yam Concepcion next year. The release date of “Topakk” has yet to be revealed as of this writing.  /ra

JM De Guzman opens up on dealing with his panic disorder