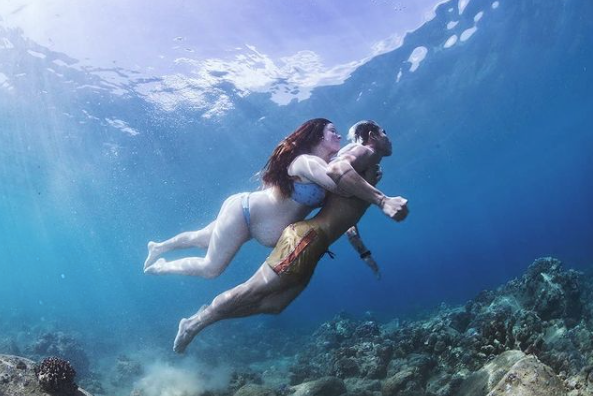 Andi Eigenmann and pro surfer Philmar Alipayo delighted loved ones and fans with underwater photos following the announcement of their engagement.

Eigenmann revealed their engagement on Dec. 20 via Instagram, where she shared a photo of her wearing an engagement ring. A day later, Dec. 21, Eigenmann showed a set of ethereal photos of her and Alipayo, beautifully captured underwater by Pernilla Sjoo.

“Such breathtaking photos from that perfect afternoon! So happy we got to do this impromptu photoshoot in the ocean,” she said. “Thank you so much once again, @pernillasjoo for taking the time to take these magical shots for us.”

In one photo, Eigenmann and Alipayo can be seen holding each other’s hands on the seabed. In another, the newly engaged couple are captured swimming towards each other, their hands outstretched.

Eigenmann’s mother, Jaclyn Jose, was the ever supportive mom as she commented, “So nice. Extraordinary! I love it sooo much!”

Another post showed Eigenmann hugging Alipayo from behind, underwater.

Prior to getting engaged, the couple revealed that they are expecting their “island boy” due in January. The two had a simple “gender reveal” in their home, which they shared to fans through their vlog last Dec. 13. The boy will be Eigenmann’s second child with Alipayo after giving birth to daughter Lilo in July 2019. She also has a 9-year-old daughter Ellie, who she co-parents with former partner Jake Ejercito. JB