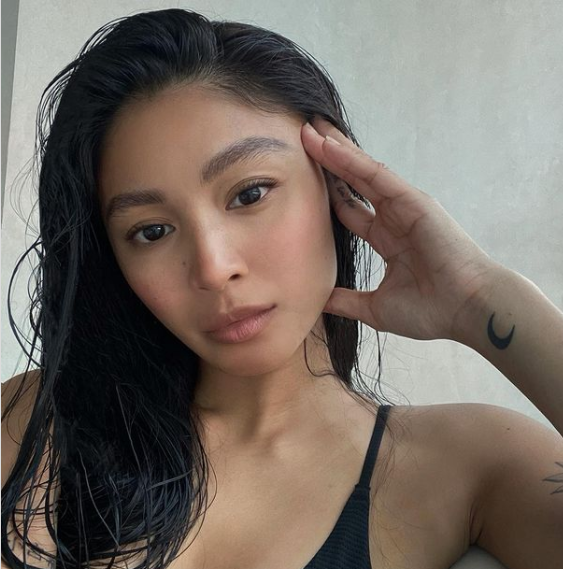 Nadine Lustre addressed speculations that she got a nose job, stressing that what she has is the “same nose” from when she was younger.

The actress responded to the statement “Nadine had rhinoplasty. Believe it or not?” posed by Dr. Aivee Aguilar-Teo in a vlog posted on the YouTube channel “Aivee Day” yesterday, Feb. 6.

“Why do people keep insisting that I had my nose done?” said Lustre, sounding exasperated.

“I feel like it’s puberty… it’s the growing up,” she explained, before insisting, “It’s real!”

She later reasoned it must have been because of weight loss.

“It’s really just this,” she said, touching her cheeks. “I feel like when this part was gone, everything else looked more defined. And of course I grew older. Things like your facial features and everything about your body is more defined as you grow older.”

“It’s the same nose!” Lustre cried out. “I really don’t understand, you know, people who keep calling me retokada because they think that I got my nose done. I really didn’t get my nose done.”

“You don’t need it,” said Aguilar-Teo. Lustre said she had consulted her about it, but she believes her nose “looks good, it’s okay.”

She looked at the positive side, stating that people telling her she must have had her nose done means her “nose is nice.” She quipped too that if she had one, she would tell people about it.

Lustre also questioned why there was still a stigma with plastic surgery.

“I don’t understand why people see it as a bad thing. And people use it against people who actually do it,” she said. “You can’t really hate on a person who wants to improve how they look and who wants to look good.”

“It shouldn’t be a bad thing. If anything, it’s none of your business because they wanted to do it. It’s their body,” she stressed.

Previously, Kathryn Bernardo also guested in Aguilar-Teo’s vlog, clearing rumors about her nose, with the dermatologist explaining that Bernardo’s nose looks more defined because she got slimmer. Niña V. Guno/JB