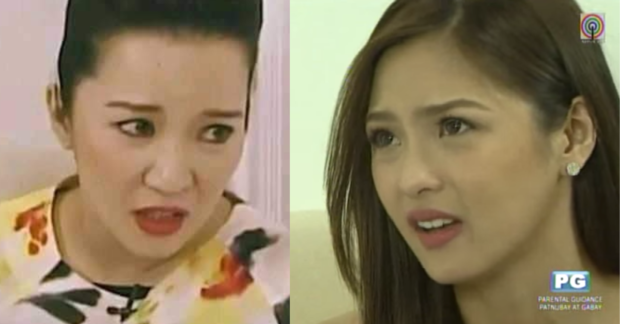 No stranger to going viral, Kim Chiu is laughing off the latest meme based on an interview between her and Kris Aquino.

The meme comes from the reaction of Aquino while waiting for an emotional Chiu to complete her statement, as seen in a “Kris TV” clip posted on the ABS-CBN News YouTube channel in January 2014.

Between tears, Chiu tries to show her gratitude to fans. Aquino attempts to help her finish her thought, at one point asking, “So na-touch ka because?” (You were touched because?)

Aquino’s relatable frustration has since become a meme for a variety of topics, ranging from government corruption to fictional characters’ questionable actions.

Twitter sensation Pipay used the meme to bring up the issue on the missing PhilHealth funds, while fandoms of TV shows like “Attack on Titan” and “Avatar: The Last Airbender” contributed their own memes.

So, wala pa ding ganap sa 15B because? pic.twitter.com/tJ7dGdXZ4y

The original interview has drawn attention too — there is even fan art of it.

made this as my warm up drawing this morning because?? pic.twitter.com/7PXU3VeD2y

Chiu is one who knows better than to take herself too seriously and joined in the meme fun on Twitter today, Feb. 7.

“[Diyos ko] kayo talaga! Nahanap [n’yo ‘to] because???” she laughingly asked. (My god you guys! You dug this up because?)

In her defense, Chiu was overwhelmed with emotion during the interview as it had come after she was criticized for her comments during a press conference for her movie “Bride for Rent.” When asked about the off-screen relationship she had with co-star Xian Lim, Chiu said, “We don’t owe you any of our personal lives.”

During her interview with Aquino after the incident, the actress said she was touched by fans coming to her defense. She also apologized to the press, and said that she would stick to speaking in Tagalog or Bisaya instead of English to better communicate her thoughts. JB