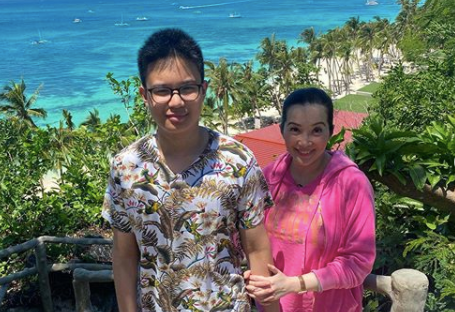 Bimby Aquino (left) and Kris Aquino on a trip to Boracay in March 2020 (Image: Instagram/@krisaquino)

Kris Aquino is making the big move to live away from the city.

In an Instagram video yesterday, Feb. 3, the talk show queen announced that she and her son Bimby are going to reside by a beach.

Aquino surprised fans at the end of her video yesterday, where she played a game of “Jojowain o totropahin (Boyfriend or friend)” featuring male celebrities and politicians.

(Do not take this seriously because this was just for amusement. In reality, my birthday gift to myself is to move to a beachfront house, which we have rented for the next six months. Yes, we will live in the province… we will distance ourselves first from NCR.)

She said she was no longer living in Pasig City subdivision Greenmeadows, and that for the last seven months, she had been staying at a service apartment in Bonifacio Global City in Taguig while figuring out where to move next.

(I will be going back to Central Luzon every six weeks to check on kuya Josh who has found his true happiness in Tarlac.)

She explained that she is moving to the province partly due to health reasons.

“Pinili kong lumayo muna sa city living dahil habang may pandemic, kailangan mas lalo ko pang pag-ingatan ang kalusugan ko (I chose to move far from the city while there is a pandemic because I need to take care of my health even more),” she said, noting that she is the “only parent” of Bimby.

“Kuya Josh and Bimb will always remain the greatest priorities of my life, but [I] can only give them my love and their [much-needed] sense of security if [I] do everything [I] can to protect my health especially because we all know my immunity is compromised because of my autoimmune conditions.”

Josh, 25, is her son with actor Phillip Salvador, while she had Bimby, 13, with basketball player James Yap, her ex-husband. She previously claimed in 2018 that Yap had not been paying for child support.

Aquino and her sons experienced living at a beachfront house during the early months of lockdown. She announced in June that they were ready to return home to Metro Manila after getting clearance and permits.  /ra

Kris Aquino lauds Bimby for getting 1st honor in grade 7