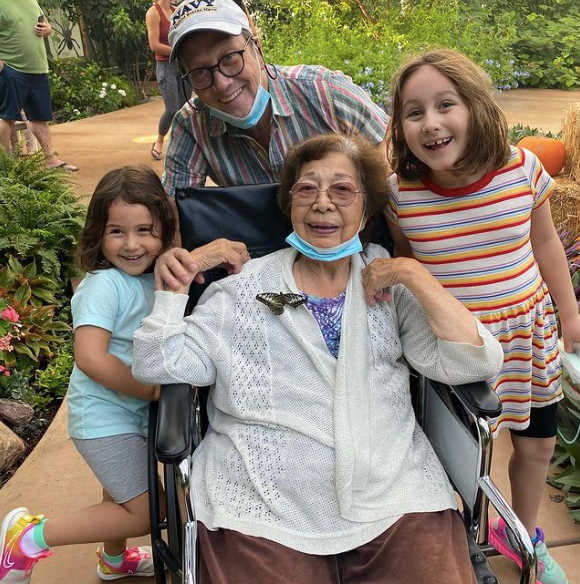 In an Instagram post on Tuesday, Rob said that his mom passed away peacefully “after spending a perfect Sunday evening family dinner surrounded with loved ones at her side.”

The comedian then narrated the story of his mother’s life, a World War II survivor who was raised by her aunt for the first three years of her life. Pilar’s mother, Rob said, had smallpox.

“Then one day this well-dressed family showed up and told her they were her family and introduced her to her mother, Victoria,” Rob said about his mom.

“Pilar grew up without a father (an American Soldier she never met until by accident 22 years later in San Francisco) who abandoned her family before Pilar was born. Pilar’s brother’s John and Bill were both killed by the Japanese as teenagers,” he further said.

As food was scarce because of the war, Rob said that Pilar’s mother and sisters sewed pajamas for bedsheets and traded them for sweet potatoes.

“After the war, Pilar was able to ‘pay for school’ because she and her sister Rose found money the Japanese buried in a cave (along with what they thought were metal pineapples which turned out to be hand grenades),” Rob said.

Pilar graduated from the University of Santo Tomas, then moved to the U.S. in the 1950s where she became a beloved for three decades.

“Three generations of children who would be grateful that years later she remembered every one of their names,” the comedian said. “Pilar spoke often of joining her beloved husband of 39 years, my lovely father Marvin Schneider… That day has come for them to be together.”

“I am proud to be able to say that I am the son of Pilar Monroe Schneider.”

Rob is known to be a veteran of the long-running American sketch comedy and variety show “Saturday Night Live.”

He also starred in Hollywood comedy films such as “Grown Ups” and “Deuce Bigalow: Male Gigolo,” among others.