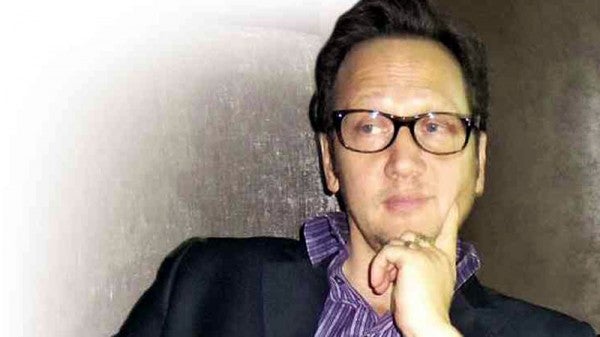 THE FIL-AM comic’s relatives were “so warm and supportive,” which made a career in comedy easy to pursue.

“I can’t be afraid to offend—half my jokes are pretty offensive,” comedian-actor Rob Schneider said last Monday at a press conference promoting his one-night show that evening, “Rob Schneider: Live in Manila.”

At the Solaire Resort and Casino’s Eclipse Bar, Schneider gamely answered journalists’ and bloggers’ queries, even chiding those who seemed distracted during the event.

“Bastos! Put the phone down for 30 seconds. I flew a long way to get here,” he jokingly scolded some individuals, sending most of the attendees reeling in laughter.

The Filipino-American comic, popular for his roles in “Deuce Bigalow,” “The Hot Chick” and a couple of Adam Sandler flicks, related that relatives were “so warm and supportive” of him when he was a kid, which made a career in comedy easy to pursue. Gatherings often had “good food (like) lumpia, pancit.”

“I grew up south of Daly City (California) in ‘Little Manila.’ I never considered myself short. I was surrounded by Filipinos. I felt like a basketball player,” the 5’4”-tall comedian said.

He related that getting high grades didn’t impress his mother, Pilar. “[She’d say], ‘So what?’ You’re not an idiot. You’re supposed to get A’s and B’s,’” Schneider recounted, mimicking her. This drove him to become “overly successful.”

Originally a stand-up comic, Schneider debuted in “The David Letterman Show” in 1987. He eventually landed a coveted spot in the “Saturday Night Live” roster in 1990 and stayed on the sketch comedy show for four seasons. Movie roles followed his TV success.

Two decades later, the return to stand-up comedy was easy. His tour started in 2011, a huge success in different countries. His Manila visit follows well-received shows in Singapore, Australia and New Zealand.

Schneider, who turns 50 today, credited his longevity to adapting with the times, becoming active in social media to get the word out on his projects. He said aspiring comedians should also take advantage of the different platforms currently available.

“Go on stage. Write jokes, go on YouTube. Create your own thing. There’s the Internet,

social media—the limitations are what you set on yourself,” Schneider explained.

But he added that comedy was a serious thing. “Right now, if you want to be the best comedian in the world, just do this. You can’t do this as a side job!”

The child of a Jewish father and a Filipino mother, Schneider hinted at the possibility of making a movie about his mom’s life during the Japanese occupation.

He also expressed an interest in making the biopic of Filipino Journey vocalist Arnel Pineda: “I’d love to produce and make that. That’s a good story. You just have to take a year of your life [to make it].”

Schneider revealed that his family contributed to his wacky and bastos personality. “I was the youngest so I got away with more,” he told the Inquirer after the press conference.

“I always got in trouble and my mom would say, ‘Robert, when do you turn off?’ I was just joking around too much. But she also got me in trouble because when I leave the house, she would say, ‘Anybody touches a hair on Robbie’s head, I’m gonna kill you,’” he recalled, chuckling.

“So my brothers and sisters kinda hated me for a while when I was a little boy,” Schneider added. “But they created a monster because they [also] supported me!”

As for his humor, he acknowledged that it had changed tremendously. “I think it’s more mature… it’s more interesting than when I was younger.”

According to Schneider, his job as a stand-up comic requires him to be familiar with the country’s culture: “Every show is different. But there’s a big chunk that’s the same and I’ll use ’em all. But you have to talk about the place you’re at; otherwise, you’re not a comic!”

It took Schneider a year and a half to prepare for the comedy tour, his routine ultimately inspired by a variety of sources. “Just living, traveling… having a baby with my wife (Patricia)… Also, just being onstage, going out there and doing over 200 shows a year—that’s a lot of material!” he enthused.