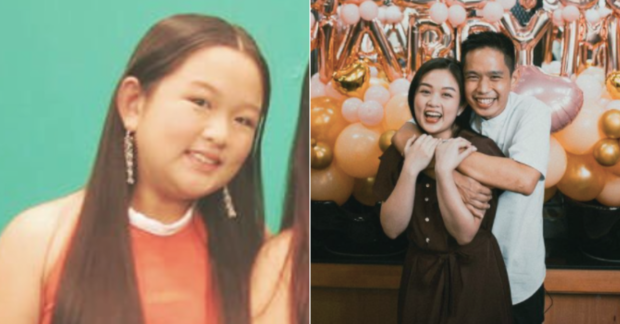 “Goin Bulilit” star Hopia is ready to get married at 26. Image: Instagram/@trinalegaspi

Trina Legaspi of “Goin Bulilit” has gotten engaged to her longtime boyfriend.

The 26-year-old actress, known as Hopia from the kids’ comedy program, announced yesterday, Nov. 28 on Instagram that boyfriend Ryan Jarina proposed to her last Nov. 22. Jarina is CEO of Ark Diversified and Automotor Group Inc., which operates Chevrolet Commonwealth.

She shared photos of her looking emotional as Jarina proposed to her in front of a backdrop of pink and gold balloons, some of which spelled out “Will you marry me?”

“Without a doubt, in a heartbeat, I said YES!” she said. “I can’t wait to marry my first and only love.”

She admitted that she was so surprised that she thought the proposal arrangements were not for her.

The engagement comes after she brought up the idea of marriage to her parents in a Nov. 20 vlog on her YouTube channel “Hello Hopia.”

She took up a fan’s question that asked when Legaspi could get married. Her Daddy Ding seemed open to the idea, saying that it should happen at the “right age.” He also said he wanted to have grandkids while he was not too old yet.

Meanwhile, Mommy Minnie was hesitant. She said she would rather have Legaspi marry in 2022 and hoped by then that the pandemic was over.

Legaspi was on “Goin Bulilit” alongside Kathryn Bernardo and Julia Montes. She took a break from showbiz to study communication arts at Miriam College. Besides going back to acting, she vlogs on YouTube where she has over 40,000 subscribers. JB