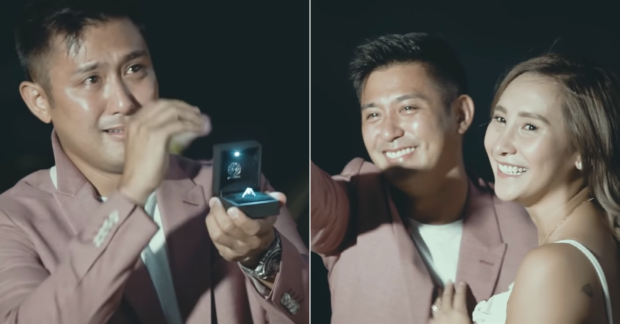 Rocco Nacino was emotional in his proposal to Melissa Gohing. Image: screengrab via YouTube/Rocco Nacino Official

Rocco Nacino made sure that his proposal to Melissa Gohing was as magical as possible—and he revealed that it took months of planning.

After announcing his engagement to the volleyball star last Saturday, Nov. 21, the “Descendants of the Sun” star gave a behind-the-scenes look at how the proposal went down on his YouTube channel on Monday, Nov 23.

“Months of planning, years of praying, secret meetings to push this through, All of this for this one magical, beautiful moment,” he captioned the video.

He admitted that had not slept before setting up the proposal, which took place in an open field that was made romantic with fairy lights and flowers by top events stylist Gideon Hermosa.

Nacino said he only hoped he would not cry because he considers himself an “ugly crier.”

His alibi for the day was that they were going to have a picnic with his brother and his brother’s girlfriend. He thought to explain that there was a camera crew because a photo shoot was going on.

When they arrived, Nacino took Gohing through the romantic trail leading to a spot where they were surrounded by flowers. Live saxophones played Gohing’s favorite song in the background.

When Nacino could not hold back his tears, Gohing also turned emotional. She said after the proposal that seeing the actor cry made her realize what was about to happen.

“Before anything I just want to say thank you. This is the best version that I am and it’s because of you. You always teach me to put God at the center of our lives,” Nacino told her before popping the question.

“Melissa Gohing, I love you with all my heart. I want to spend my life with you, the rest of my life with you,” he said. “You’re the most beautiful woman in the world, in God’s eyes and especially in my eyes. You deserve nothing but the best.”

Finally, he asked, “Melissa will you marry me?” and went down on one knee. Both were emotional at this point.

Melissa said yes—not just in front of him but also a virtual audience that included their loved ones watching through video call.

“I didn’t expect it at all,” said Gohing in the video. She said on Instagram that she was still in disbelief that Nacino was able to involve not only their families but also friends and people dear to her, including her volleyball teammates and coaches through the years.

The engagement comes after three years of dating for the couple.  /ra