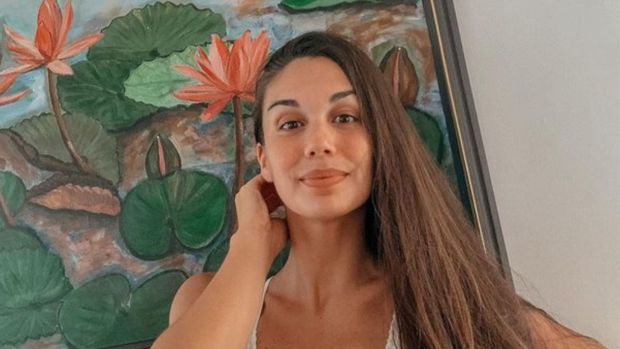 Former beauty queen Sandra Seifert shut down a basher who suggested that she was the naked woman in Cesar Montano’s viral birthday greeting back in 2018.

The person made the remark after the Miss Philippines Earth 2009 titleholder posted a photo of her 5-year-old son with Montano. The image shows the actor hugging and kissing Corinth Ian, as seen on her Instagram page yesterday, Nov. 25.

Moments after, a certain @mary_christine98 asked if her post confirmed that she was the naked woman in Montano’s 2018 viral video. The Instagram user also called Seifert a mistress, immoral and a snake.

“@mary_christine98 sorry to disappoint you but I’m not the woman in the viral video,” Seifert said. “[Please do your research so you can find out who she is [wink emoji]. God bless” 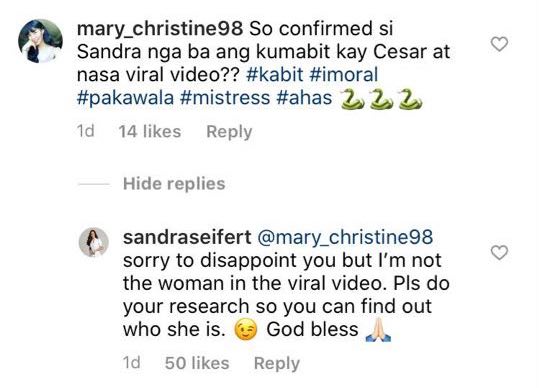 However, for the new video, Montano made sure there was no naked woman in sight. Instead, it featured the then-mystery woman fully clothed as they wished Carvajal well.

After Carvajal shared the video on her Facebook page, the woman was identified as a certain Maria Socorro “Kath” Angeles.

Seifert and Montano have been romantically linked since 2015, with rumors circulating that she was pregnant with his child.

Despite the sweet photo of the actor with her son, Seifert did not say who Corinth’s father was.  /ra

Read Next
SB19’s ‘Alab’ claims No. 1 spot on Billboard’s LyricFind Global chart
EDITORS' PICK
Duterte vouches for Galvez: Why focus on alleged corruption in vaccine pricing?
New Year, New Rediscoveries
Experience clearer calls nationwide with Smart VoLTE
Vaccine nationalism puts world on brink of ‘catastrophic moral failure’ – WHO chief
Driving can be even more rewarding this New Year — here’s why
Norway advises caution in use of Pfizer vaccine for the most frail
MOST READ
Duterte to firms: No franchise until you settle your accounts with gov’t
7 copassengers of UK variant patient can’t be traced
3 things Leni can learn from Biden’s victory
#DefendUP trends after DND scraps agreement with UP
Follow @RArcadioINQ on Twitter
Don't miss out on the latest news and information.