Adamat shared last Sunday, Oct. 28 pictures of him with Montano, the child Kristen, and other friends in a celebration with pink balloons. 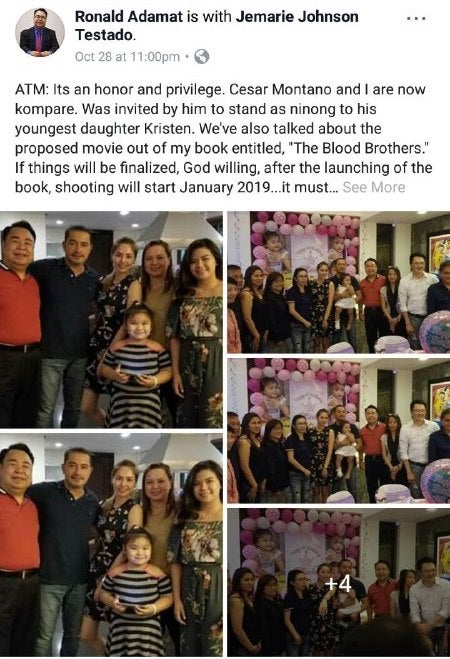 “Cesar Montano and I are now kompare,” wrote Adamat. “Was invited by him to stand as ninong to his youngest daughter Kristen.”

The actor is also involved in the movie adaptation of the commissioner’s book “The Blood Brothers”.

Beside Montano in pictures is a woman with long, light brown hair, who according to the Philippine Entertainment Portal’s sources, is Socorro “Kath” Angeles, his current partner.

He and Angeles reportedly have three children and the occasion at hand was to celebrate their youngest child’s baptism and first birthday.

Cesar Montano breaks silence on annulment of his marriage

Your subscription could not be saved. Please try again.
Your subscription has been successful.
Read Next
LOOK: Is that a naked woman behind Cesar Montano?
EDITORS' PICK
Philippine-United States alliance ‘rock solid’ — DFA
Fuel price rollback expected on Feb 7
vivo Philippines offers a free bouquet of flowers and a premium necklace perfect for Valentine’s Day
Omega Speedmaster super racing: Tiny device massive change
Makabayan bloc blasts bid to expand US access to more military bases in PH
House energy committee chair Arroyo bats for cheap electricity
MOST READ
Vice Ganda gets called out for ‘unfair treatment’ of ‘It’s Showtime’ co-host Karylle
Fuel price rollback expected on Feb 7
Kris Aquino gets ‘renewed confidence’ after consultation with new doctor: ‘I have a strong chance of getting better’
Pokwang tells self amid revelations on past relationship: ‘Bangon, nanay ka’
Follow @NGunoINQ on Twitter
Don't miss out on the latest news and information.