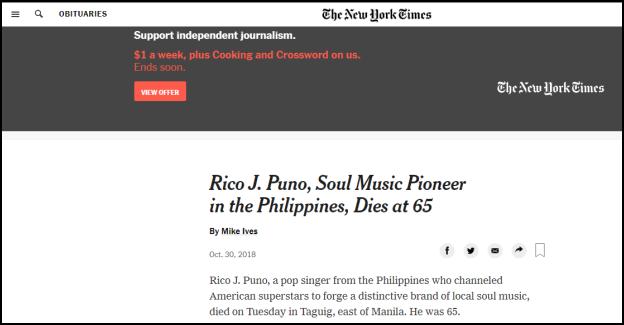 Rico J. Puno, Makati City councilor and iconic singer known as “The Total Entertainer,” made it to the obituary section of The New York Times on Tuesday, shortly after his death of a heart attack at the age of 65.

“Mr. Puno made American music his own by adding bawdy lyrics and banter in Tagalog,” Ives wrote. “One of his best-known covers, for example, was ‘You Don’t Have to Be a Star,’ by Marilyn McCoo and Billy Davis Jr. And he embellished it with this line: ‘Even if you’re ugly, I still need you’.”

“Mr. Puno’s big break — a deal with Vicor Records — was precipitated by an encounter in the 1970s with the Motown band The Temptations at The Palazzi, a club where the young singer played regularly. It was during this period that he recorded his signature version of ‘The Way We Were,’ among other popular American songs,” Ives added.

“Over the years, Mr. Puno performed solo and with The Hitmakers, a group that included the Filipino musicians Rey Valera and Hajji Alejandro.”

Puno, along with Valera, Alejandro, and many others, pioneered what came to be known as “Manila Sound,” which later would be called “Original Pilipino Music.”

Ives quotes Puno as saying at a news conference last February: “Only God can stop me from singing. He gave me this ‘gift’ and only He can take it back.” /atm