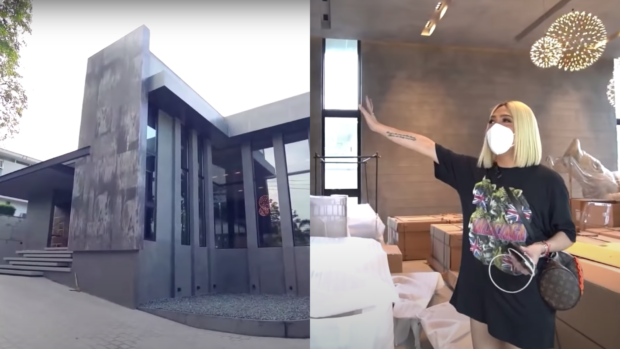 Vice Ganda gave his fans a look at his new home, which features a spa area and an elevated pool, among others.

The comedian showed parts of the industrial-style house in a vlog on his YouTube channel last Wednesday, Oct. 7.

He explained that he bought the property six or five years ago for his grandfather. However, when his grandfather passed away, Vice became too sad and left the land idle for a while.

Years after, he eventually decided to tear down the old home on it and build his own. His new house took three years to complete and measures 1,300 square meters.

Vice initially planned on moving into the house last March, but had to delay due to the COVID-19 pandemic.

“Nag-lockdown, so hindi ako nakalipat. ‘Yung mga gamit na in-order ko for delivery, hindi siya na-deliver (Lockdown was imposed so I was not able to move in. The furniture I ordered were not delivered),” he explained.

When lockdown measures relaxed, he was allowed to move in already. But it still did not push through due to the reimposition of strict quarantine guidelines weeks after.

“So ngayon, lumuluwag na ulit kaya unti-unti papalipat na kami (So now, [quarantine measures] have relaxed again, so we are moving in bit by bit),” he said.

Along with his spa area and elevated pool, Vice also had an elevator installed for when his mother visits. Throughout the 25-minute video, the comedian showed the quarters for his maids and drivers, an entertainment area and two large kitchens as well.

Aside from finalizing the move into his new home, Vice previously launched his own digital network called Vice Ganda Network last August.  /ra