Angel Locsin to those ‘making up an excuse’ to not join protests: ‘You don’t need to go out to use your voice’ 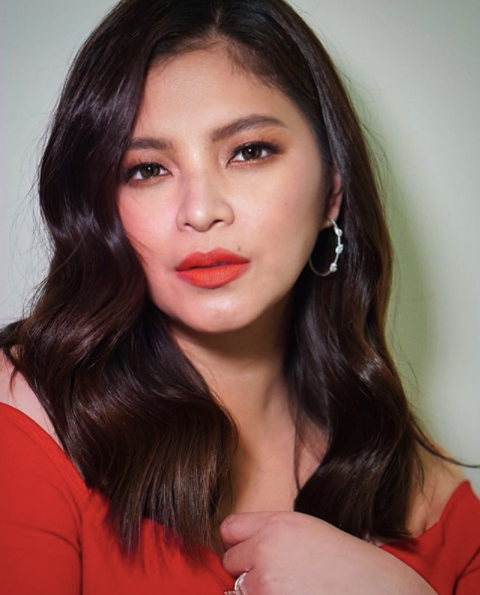 After calling out some of her fellow stars who are staying silent about ABS-CBN’s shutdown, actress Angel Locsin clarified that people could speak up about the issue even if they do not attend rallies.

“No one asked you to go to a rally,” Locsin clarified on her Instagram Story yesterday, July 20. “But making up an excuse to save face at the expense of those who are fighting for their lives is purely disgusting.”

Locsin has been active in participating in virtual and physical protests to appeal for the TV network’s franchise renewal, ever since ABS-CBN was ordered to stop operating last May.

The actress stressed that “you don’t need to go out to use your voice for the voiceless.” 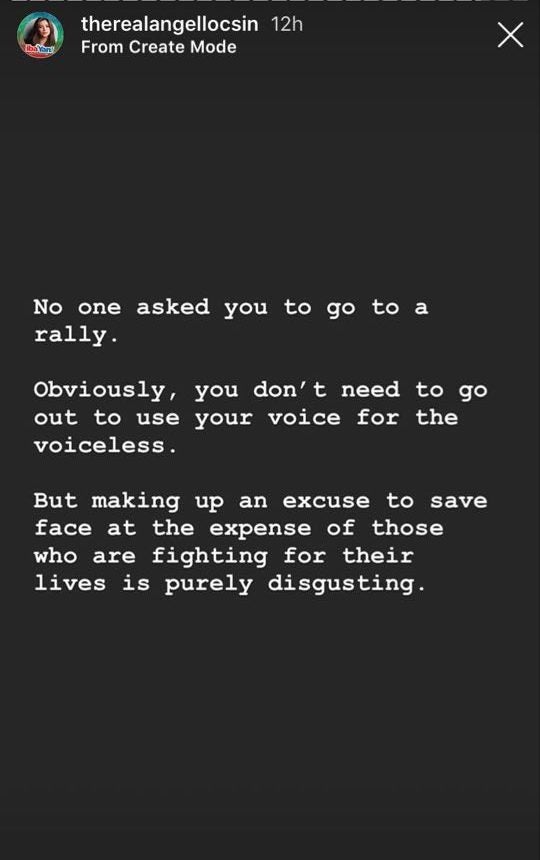 The “Darna” star decried the silence of her fellow celebrities who are said to be just trying to “look cute on Instagram,” while the network that paved the way for their successful careers is gone. Locsin was one of the numerous Kapamilya stars who joined the noise barrage outside the TV network’s headquarters in Quezon City last Saturday, July 18. This was a few days after the media’s application for a new franchise was denied in Congress on July 10.

One of the celebrities who broke their silence following Locsin’s appeal was Jane De Leon, who was meant to play Darna on the TV network’s series reboot on the iconic Filipino heroine.

De Leon explained that she did not join rallies due to the threat of COVID-19. She cited the growing number of COVID-19 cases in the country as well as her concern for the frontliners who are risking their lives to battle the spread of the virus. De Leon then appealed to others to stop being “judgmental” and to quit “imposing what others should do according to [their] personal standards and beliefs.”

Following Locsin’s Story, some netizens questioned whether or not Locsin was referring to De Leon in her statement.

Twitter user @scorsaguin put Locsin’s Story side-by-side with a meme on the same day. A cartoon photo of a grave stated that “Here lies indoor [Darna],” a title that has been associated with De Leon on Twitter after her statement.

“We don’t want an INDOOR DARNA who makes excuses and justifies it by putting in bad light those who do what she cannot do,“ a certain @marie_kcc said, retweeting the netizens’ post today, July 21.

We don't want an INDOOR DARNA who makes excuses and justifies it by putting in bad light those who do what she cannot do. jane de leon is CANCELLEDT! https://t.co/U9EHvDdtMh

De Leon has been compared to Locsin for their differences in approach on the ABS-CBN issue. Some fans understood De Leon’s stand and saw nothing wrong about refusing to go out for a protest amid the pandemic, while others branded her appeal for prayers as “toxic positivity.”

Aside from De Leon, some of the TV network’s biggest stars have recently took a stand on the issue, including Sarah Geronimo and Nadine Lustre. The media company’s bid for a fresh 25-year franchise was rejected by the members of the House committee on legislative franchises after 70 lawmakers voted “yes” to the report recommending to deny the franchise application. JB