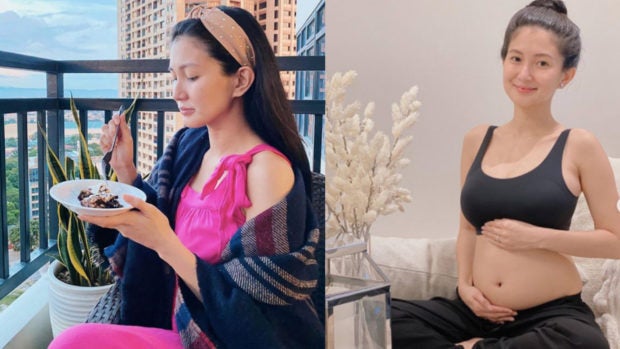 Actress Sheena Halili explained why carrying a growing baby inside of her is not an easy journey, as she narrated the issues she encountered during her first trimester.

Halili said that her sense of smell became very sensitive, which made it difficult for her to eat and drink certain things. Now that she has made it to her second trimester, the actress now feels transformed as a blooming mom, she shared via Instagram yesterday, July 14.

(I’m happy to be able to eat properly again. My pickiness when it came to odor disappeared when I reached my 14th week of pregnancy. It was like magic, suddenly the baby and I were okay to smell and eat.)

The actress is pregnant with her first child with her husband, lawyer Jeron Manzanero.

About her pregnancy cravings, Halili loves eating fruits such as cherries, kiwis, mangoes and apples. She also likes cold drinks and coconut water. The actress said she enjoys eating crabs and sweet treats every once in a while.

“And I love my husband,” Halili said. “Siya yata talaga pinag-lihian ko (He is probably the one I am liking the most [during my pregnancy]).”

The actress previously had issues with hair fall and she found it difficult to drink water and vitamins without getting sick. Halili joked that she and her baby “perfected” every pregnancy issue she had during the first trimester.

(We all have different pregnancy experiences, and remember mommies, we can do it! Everything we are experiencing are just stages in our pregnancy.)

Lastly, she expressed her gratitude to her concerned fans who have been recommending some food she could eat. She assured them that she consults her doctor and does her own research to be “the best mom” to her baby.

The actress first announced that she was with child last June. Halili and Manzanero tied the knot in February through a dazzling, star-studded wedding in Quezon City. In 2018, Manzanero proposed to the actress at a movie theater in San Juan. JB

WATCH: Solenn Heussaff talks about struggles in pregnancy, being nursed by Nico Bolzico