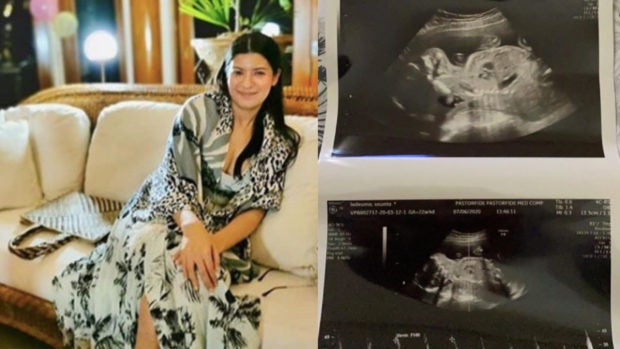 Actress Assunta de Rossi has announced that she got through the first and second trimester of her pregnancy without any complications, despite the COVID-19 pandemic and the quarantine measures in the country.

De Rossi showed the ultrasound of her baby via Instagram last Monday, July 6. The actress said they were able to check the baby’s heartbeat, size and weight, but there is still no way to determine the baby’s gender at this point.

“I’m feeling a bit emotional because the last time I had a scan, the baby was as small as a jellybean, if not smaller,” de Rossi said. “It’s the fear of not knowing.”

She is currently five months pregnant with her first child with her husband, politician Jules Ledesma.

Heartbeat ✅ Weight ✅ Size ✅ Gender… no way of knowing yet if I’m having a coccolino or a coccolina. Hmm… my little miracle from heaven is being pasaway. Alam na kung kanino nagmana! 😈🤣 But seriously, I’m feeling a bit emotional because the last time I had a scan, the baby was as small as a jellybean, if not smaller. It’s the fear of not knowing. But I survived my 1st and 2nd trimester during a pandemic and lockdown without any complications! Cheers! #5monthspregnant #MiracleBaby

De Rossi explained that the baby was a “miracle” because she and Ledesma have been waiting to have a child for 18 years. The actress first announced that she was pregnant last May. Back then, de Rossi narrated some of the difficulties she was experiencing in her pregnancy, including fatigue, nausea, food aversions, constipation and dizziness.

De Rossi and Ledesma got married in 2004. JB

Lara Quigaman on how Marco Alcaraz eases her pregnancy insecurities

‘Baby C is a he’: Coleen Garcia, Billy Crawford having a baby boy