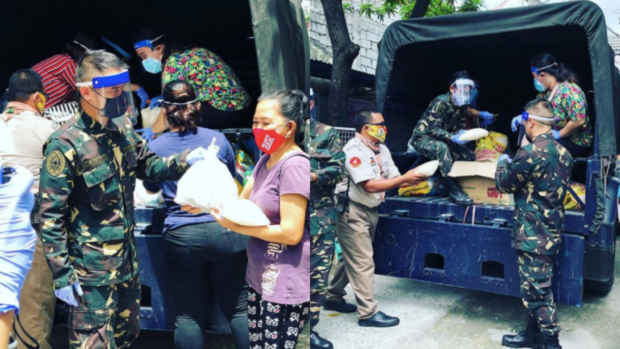 JM de Guzman distributed relief goods to 150 persons with disability (PWDs) in Navotas City with his colleagues from the Philippine Air Force (PAF).

The actor posted photos from the initiative on his Instagram page last Friday, June 26.

De Guzman started training as a reservist under the PAF last March with fellow Kapamilya actor Kiko Estrada. Along with some officers from the PAF, members of the Boy Scouts of the Philippines (BSP) joined the effort as well.

The actor and the officers wore their army fatigues while handing out the supplies. They observed precautions against the coronavirus and wore face masks, face shields and gloves. Meanwhile, De Guzman’s brother Matthew and some fans also helped out on the relief operation.

3rd relief operations for our 150 PWDs in navotas with Airforce first Arcen , Lt. Col. Hermie Calubiran, 1st Lt. Shahani Ballares ,Boy scouts of the philippines council @hukbongjmofficial, Asec Kim De leon @kimrobertdeleon and Cong. John Ray Tiangco. @matthewdeguzman @showtimestephanie Thank you too boyscouts of the philippines for making us honorary members in Navotas Council. Thanks so much for the love and your donations. #ToGodbetheglory #weLeadasone

Following the initiative, de Guzman and his PAF colleagues were made honorary members of the BSP Navotas City council.

Along with de Guzman, Arci Muñoz has also begun undergoing reservist training under the PAF. The two actors join other celebrities who are also part of the country’s reserve force. Among them are Matteo Guidicelli, who enlisted as an Army reservist in April 2019 then underwent Scout Ranger Training the month after; and Navy reservist Dingdong Dantes who was promoted to the rank of lieutenant commander last January. JB