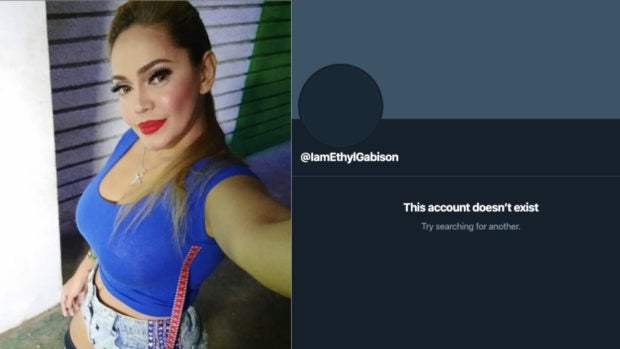 Booba appealed to the account to “stop using [her] name.” The account has also been deactivated from the platform as of this writing. However, some netizens questioned the comedienne’s retraction, citing different interviews in which Booba allegedly claimed ownership of the account and its tweets.

The Twitter account with the mentioned handle was a staunch critic of the administration and was known for its funny takes on social and political issues. Last November, the account gave its two cents on the Southeast Asian (SEA) Games’ controversial P50 million cauldron by joking that it would be worth its cost if corrupt officials were used to fuel it.

The account @IamEthylGabison also took a jab at current Overseas Workers Welfare Administration (OWWA) deputy administrator Mocha Uson on several occasions, some dating as far back as 2016. One of the account’s most recent interactions with Uson was when it defended Mayor Vico Sotto from a post published in the “Mocha Uson Blog” Facebook page. Booba’s supposed fake account told Uson that it was better to “act cute than to be dumb,” after the blog’s post called out Sotto for his tricycle initiative in Pasig City during the enhanced community quarantine.

Several Twitter users questioned Booba’s disappearance from the platform and claimed that Booba acknowledged the account in her previous television appearances.

A snippet of the TV show “Pareng Partners,” hosted by Anthony Taberna, showed Booba saying that she was most active on her Twitter account compared with her other social media pages. A closeup look on Booba while she was using her phone also showed her using the Twitter account with the handle @IamEthylGabison, as seen on @kaeofficial’s Twitter post today April 10.

In the interview with Taberna, Booba revealed that before she posts her opinions on Twitter, she “brainstorms” her ideas with her friends and advisers.

“Now I wouldn’t be surprised if there is a PR team behind the account,” the netizen who uploaded the video said. “[But] her pretending like she only learned about the account yesterday is very fishy.”

Now I wouldn’t be surprised if there is a PR team behind the account, but her pretending like she only learned about the account yesterday is very fishy pic.twitter.com/RCkMgyFZkE

When Booba became a guest on the noontime TV show “It’s Showtime,” the comedienne reacted to some of her tweets during one of its segments. Booba said that the account had a lot of handlers but she did compose some of the tweets published in the account, a portion of which was uploaded on ABS-CBN It’s Showtime’s YouTube channel on Nov. 15, 2019.

A Twitter user @Riyeeeelz also uploaded the video on the platform today, questioning why Booba said the account was fake if she claimed being an admin of the account.

How come that Ethel Booba’s twitter account (@IamEthylGabison) is fake and she doesn’t know who owns it, when she claimed it herself from several interviews back then that the account is being co-handled by an admin and her, & and that some tweets is indeed tweeted by her. 🤔 pic.twitter.com/9WleCKJOWe