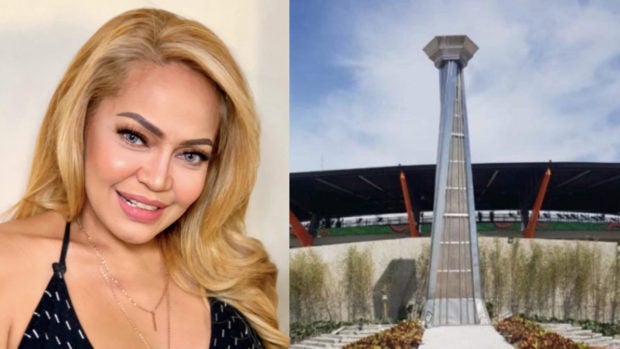 After days of dispute about the controversial Southeast Asian (SEA) Games P50 million cauldron, comedienne Ethel Booba joked that the structure would be worth its price if corrupt officials were used as fuel.

(The cauldron is worth it if corrupt officials are used to fuel the fire. Kidding!)

The SEA games cauldron has been marred with criticism due to its alleged overpricing and extravagance. Senator Franklin Drilon referred to the structure as “a P50-million kaldero,” stating that the cost of the design and the construction of the project could have been used to create 50 new classrooms instead.

Booba is just one of the celebrities who took a jab at the multi-million peso project. Singer Leah Navarro also did not mince her words last Monday when she called the stadium structure “an unimpressive, ugly, one-time use butane lighter.”

President Rodrigo Duterte defended the cauldron in a press conference in Malacañang on Tuesday, Nov. 19. He also dismissed claims that its creation was sullied by corruption.

“There can never be corruption in that situation because you commissioned a National Artist,” Duterte said.

He also said that the structure is a “product of the mind” of the late Francisco “Bobby” Mañosa, one of the country’s national artists for architecture.

It was revealed during the Bases Conversion and Development Authority’s (BCDA) budget deliberations at the Senate last Monday that the late architect designed the cauldron for P4.4 million. The foundation of the structure cost P13.4 million and its construction amounted to P32 million.

The President reasoned that commissioning the design for the cauldron was like commissioning an artist for a painting: “You cannot debate with the painter … Now, you create a symbolism of the athletic activity … There’s no extravagance there.” NVG