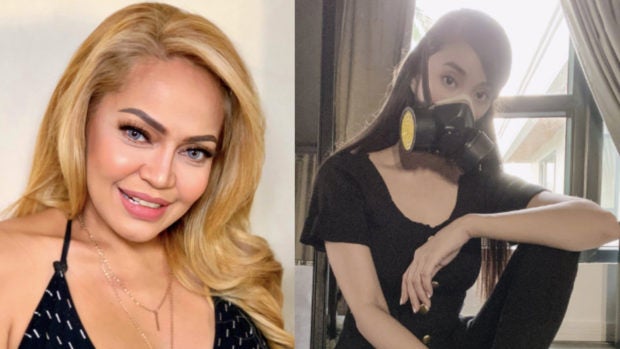 After Taal Volcano’s eruption last Sunday, Jan. 12, which caused a wide stretch of ashfall in some provinces and cities in Luzon, comedienne Ethel Booba and TV host and cosplayer Alodia Gosiengfiao warned the public about the negative effects of inhaling ash to one’s health.

Gosiengfiao encouraged wearing face masks and gave alternatives in the event that citizens could not purchase the optimal dusk masks.

The Department of Health (DOH) informed the public about the health risks of being exposed to volcanic ash. DOH advised that “anyone who already suffers from health problems such as bronchitis, emphysema, or asthma should avoid exposure to volcanic ash.” The department also said that exposure to the ash may cause nose and throat irritation, breathing discomfort, eye irritation, minor skin problems and bronchitis-like illness.

Comedienne Ethel Booba advised others to be extra cautious due to the ashfall on her Twitter account last Monday, Jan 13. Booba cautioned that inhaling the ash might cause lung disease pneumonoultramicroscopicsilicovolcanoconiosis.

DOH stated that “volcanic ash consists of powder-size to sand-size particles that have been blown into the air by an erupting volcano,” but it did not mention if the ash could cause the mentioned disease. The Department of Environment and Natural Resources (DENR) also warned the public about the smaller volcanic particles, which may not be seen by the naked eye, that could potentially go straight to the bloodstream once inhaled.

Aside from staying vigilant, Gosiengfiao also offered followers alternatives to the N95 mask.

“Just because you don’t see it, doesn’t mean [it’s] not there,” she said on her Twitter account yesterday. “Volcanic ash when seen through a microscope are like tiny pieces of glass shards so if you inhale it it may lead to various problems.”

Gosiengfiao, who is the chief creative officer of the esports talent agency Tier One Entertainment, gave the company’s employees N95 masks to be used for the days to come, as per her tweet. She also added that her company is trying to get more masks which will be ordered from Cebu.

Since the dusk masks N95 are swiftly disappearing from stores in Metro Manila due to its growing demand, Gosiengfiao said affected residents could purchase the alternative R95 masks or use surgical face masks with an additional two layers of facial tissue. They could also create a makeshift mask made out of cloth or use a wet handkerchief or towel as other alternatives, she noted.

Just because you don't see it, doesn't mean its not there. Volcanic ash when seen through a microscope are like tiny pieces of glass shards so if you inhale it it may lead to various problems.According to DOH, inhalation of volcanic ash may..#TaalVolcanoAshFall #TaalEruption2020 pic.twitter.com/1cyePE4msd

Meanwhile, Dr. Gerry Bagtasa of the University of the Philippines Institute of Environmental Science and Meteorology stated that N95 that is more suitable for gravely affected communities and is no longer need in Metro Manila. However, given Metro Manila’s daily pollution, covering the nose and the mouth with a mask can still be helpful.