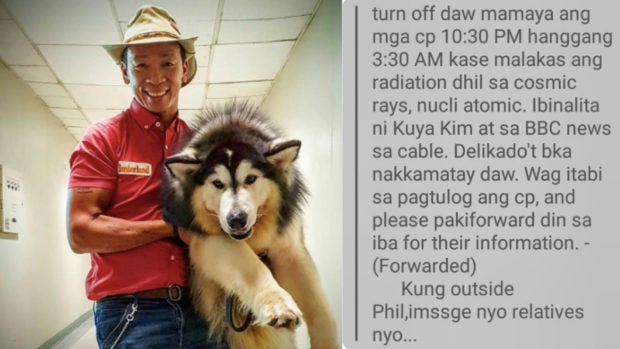 Television host and weather anchor Kim Atienza warned the public about a hoax message circulating the internet about radiation that allegedly has harmful effects on people’s health. The message advises people to turn off their cellphones from a certain period of time due to radiation from “cosmic rays.”

Atienza clarified that the message was “recycled 10 year old fake news,” as he took the screenshot of it on his Instagram account yesterday, Jan. 12. The message cited Atienza and United Kingdom television and news network BBC as its source. It said that being exposed to radiation could be lethal.

Atienza said the message was untrue and fear mongers spread misleading information during disasters such as the recent eruption of Taal Volcano.

“They spread it around whenever people are vulnerable at times of disaster,” he said.

Atienza also reposted a screenshot of a 2014 article in ABS-CBN News, addressing the cosmic ray hoax message, as seen on his Twitter account yesterday. The news site clarified then that neither Atineza nor BBC ever reported such information.

Meanwhile, the Philippine Institute of Volcanology and Seismology (Phivolcs) raised the danger level at Taal Volcano to level four yesterday, Jan. 12. This means hazardous eruptions are possible while the volcano continues to belch out ash, steam and small rocks. Earlier today, the institute also reported a lava fountain emerging from its main crater. JB