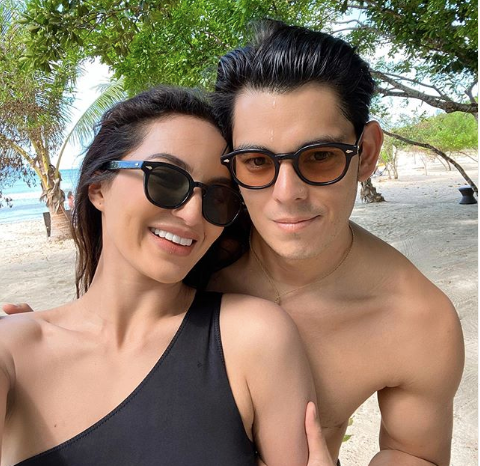 As the wedding day draws closer for celebrity couple Richard Gutierrez and Sarah Lahbati, the two went through a breathtaking prenup shoot in El Nido, Palawan.

The stunning bride- and groom-to-be dared to dive underwater to show their love for each other in the shoot with professional photographer Pat Dy, as seen on his Instagram page yesterday, March 4.

The lensman commended the couple for their dedication and for catering to his team’s requests, even after getting bitten by jellyfish and swallowing some seawater while free diving.

Dy also talked about some of the challenges while shooting underwater, and the tendency of some subjects to look awkward while executing the concept. However, this was not the case for Gutierrez and Lahbati. Dy declared that after seeing the couple’s effort, “I knew right away the shoot was going to be an [epic] engagement shoot.”

Gutierrez and Lahbati held hands underwater while trying to swim up to the surface. Lahbati donned a white two-piece bikini while Gutierrez wore black swimming trunks; both of them also had scuba fins on. The scene showed coral reefs and the blue green water where the couple swam, while the other half of the shot displayed the rock formation above.

“Effort level 100! Imagine the number of takes we had to do!” Dy said on a separate post. Lahbati and Gutierrez once again held hands while the she was floating above him underwater.

Gutierrez also shared a series of prenup photos with his fans yesterday. Starting with a simple white ensemble, the future Mr. and Mrs. Gutierrez stood by the beach in a loving embrace.

The two also took a dip in the water; Lahbati held on to the actor while they looked deeply into each other’s eyes, as seen on Gutierrez’s follow-up post on the same day.

Meanwhile, Lahbati thanked their photographer for “capturing our memorable prenup treasures in one of our favorite places.”

The actress sat on what appears to be a portion of a boat while Gutierrez floated in the water beside her, in a black and white shot which she posted on her Instagram account.

The two also rode a yacht. Lahbati was dressed in a satin green attire while Gutierrez sported an earth-toned long sleeves shirt. The couple smiled while hugging each other on the vessel.

After getting engaged back in 2017, the celebrity couple is finally about to tie the knot in Manila this month. JB