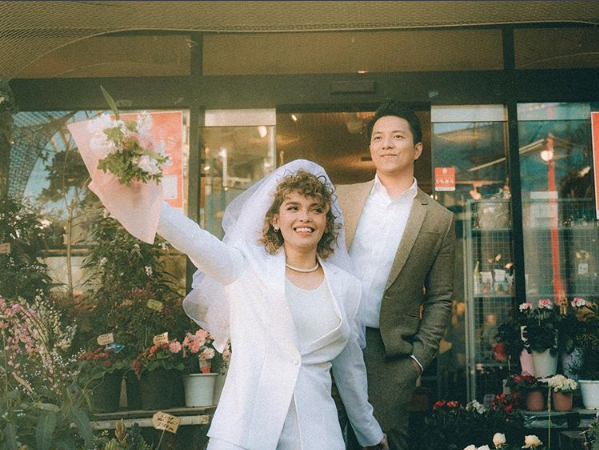 After singers KZ Tandingan and TJ Monterde announced their engagement last December, friends and fans have been waiting for the day the two would finally tie the knot.

But apparently this was not what their fans and friends were waiting for when the former “X Factor Philippines” winner and the singer-songwriter were shown in a photo in which the former was dressed in an all-white pantsuit and white veil ensemble while holding a simple flower bouquet, and the latter was right behind her dressed in an earth-toned suit. They were in what appears to be a potted flowers and plants shop in Tokyo.

The photo was posted on Tandingan’s Instagram account yesterday, Feb. 28. Monterede, however, clarified on Twitter that the photos, which showed Tandingan wearing a veil, was just an “engagement shoot.”

Tandingan cryptically captioned the post “28,” leading some to congratulate the two on their supposed marriage.

Some actors sent their love and congratulations to the couple such as Jessy Mendiola, Angel Locsin and Sarah Lahbati. Friends from the music industry also extended their best wishes, including Bugoy Drilon and Jason Dy.

But the celebration was apparently premature as Monterde clarified that he and Tandingan were not yet married on his Twitter account on the same day.

(Thank you to those who congratulated us, but it was only an engagement shoot, not the actual wedding.)

On Instagram, Monterde also called the rapper his “soon-to-be” while he greeted Tandingan “happy 28.”

Tandingan shared with her fans a couple more scenes of their stroll in Tokyo for the photoshoot.

The two could be seen holding hands while strolling on the street and resting behind colorful vending machines in the photos.  /ra