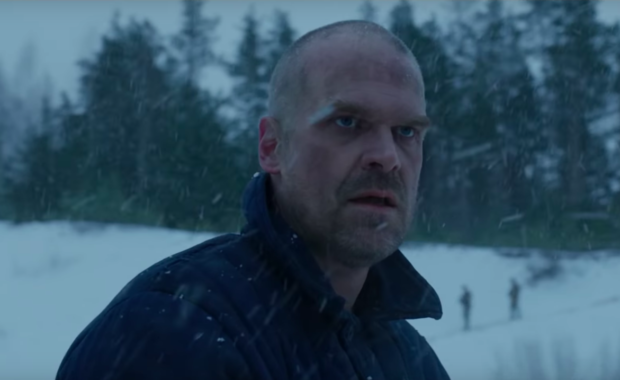 David Harbour has played the character of Jim Hopper since the launch of the Netflix series in 2016. Image: Courtesy of Netflix France/YouTube

Snowy Russia will provide the setting for the fourth season of the Duffer brothers’ science fiction horror series.

In a press release on Friday, Feb. 14, Netflix announced that shooting of the fourth season of “Stranger Things” is now underway. The news was accompanied by a short video showing the first images of the new season and the surprise return of Jim Hooper, who had been left for dead at the end of season 3. Unfortunately, however, he has been back to life, but is far from comfortable surroundings, in what the press release describes as “the snowy wasteland of Kamchatka.”

The fourth season will follow Jim Hooper’s struggle to survive in a Russian open-air prison, as he battles men and supernatural forces. Meanwhile, back in the United States, a long-buried dangerous power awakens and threatens the entire Earth.

Netflix has promised that this fourth offering will be “the biggest and most frightening season yet.” However, the streaming giant did not specify a release date or the number of episodes.

The most recent offering of “Stranger Things,” which released on Netflix on July 4, 2019, was a third season comprising eight episodes. It had been eagerly awaited by fans of the science fiction horror saga since the end of the second season in 2017. All of the show’s seasons including season 1, which first aired in July 2016, are available on Netflix.  CL /ra

Live-action ‘Aladdin’ sequel in the works